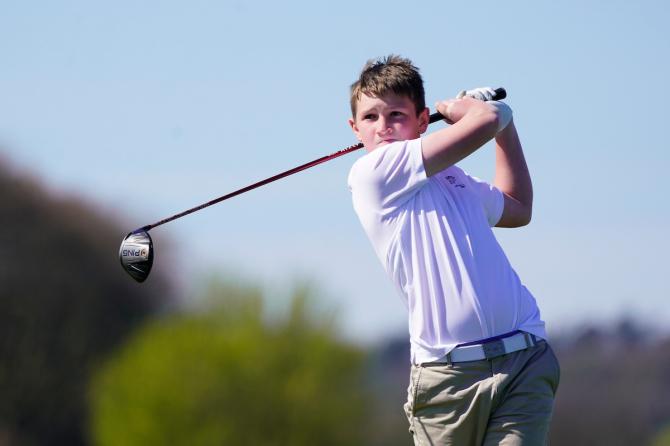 Finlay Eager (Royal Belfast) has extended his lead at the Irish U16 Boys’ Open while David Lyttle (Castlerock) takes a one shot advantage into the final day in the U14 category.

Eager, who held a two shot lead overnight, extended his advantage to three with a second round 68. Having posted a bogey-free round on Wednesday, the Ulster Interprovincial dropped four shots today, but seven birdies softened the blow.

In the U14 event, Lyttle has posted rounds of 74 and 72 for a four over par total to leave him one shot ahead of Seapoint’s Adam Fahey. Despite being three over after his opening three holes today, Lyttle battled to bring his round back, posting birdies on the eigth, ninth, 11th and 16th.

With the Championship on the line tomorrow, Fahey will be looking to limit the damage in his pursuit of Lyttle as, despite an eagle and two birdies on his card today, two double bogeys proved costly.

Twenty-four players made the 36-hole cute in the U14 event with a further fourty-six competing in the final round of the U16 Championship.