McIlroy in contention after brilliant first round at Brookline 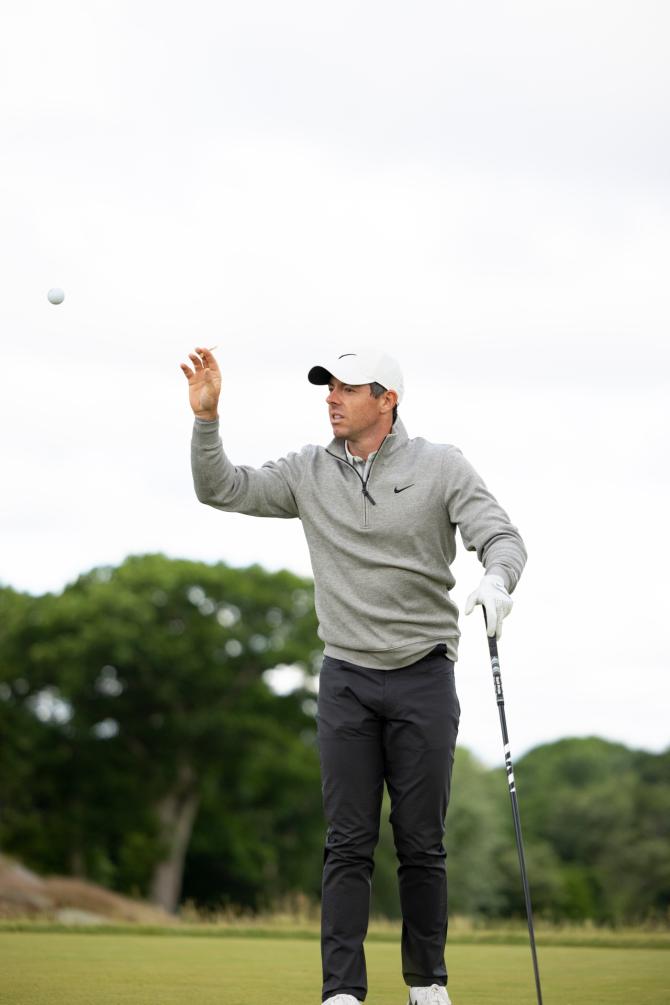 Rory McIlroy followed up his victory in the Canadian Open with a terrific first round in the US Open at Brookline. Pic: Credit USGA.

Round one of a U.S. Open has a tendency to send observers to bio pages or Google. While there might be an occasional big name at the top of the leader board, the opening round is known for its surprises, and the 122nd championship that began Thursday at The Country Club followed that script.

How about an alternate leading the field? Adam Hadwin certainly is known in golf circles – he owns 12 professional wins, including one on the PGA Tour. But the 34-year-old Canadian, the first alternate from the Dallas final qualifier, wasn’t even in the field until Paul Casey withdrew on Monday.

Five players were one stroke behind, including Rory McIlroy, a four-time major champion coming off his successful RBC Canadian Open defense last week.

Big names mixed with unheralded qualifiers. It’s what separates the U.S. Open from the other three major championships.

“Sixty-six at a U.S. Open to take the first-round lead is incredible,” said Hadwin. “It's amazing. It's something...nobody can ever take away from me at this point, but I have bigger things in my mind.”

Hadwin, who was one over through three holes, kickstarted his round with three consecutive birdies from No. 7 to turn in 4-under 31. He played even-par golf on the second nine with one birdie (No. 13) and one bogey (No. 12).

While his form has not been great in recent starts, Hadwin did tie for ninth in The Players Championship, which began a streak of three consecutive top 10s, including a share of fourth in the Valero Texas Open.

“I think between myself and my caddie, Joe [Cruz], we did a great job of preparing for the golf course and certain conditions,” said Hadwin, who was coming off his own National Open last week in Ontario, where he tied for 35th. “Things started to firm up a little bit as we finished, so take note of that as well going into tomorrow. I imagine this golf course without rain will only get firmer and faster.”

The beginning of the week didn’t go so well for Tarren, a 31-year-old who played collegiately at Radford (Va.) University. He arrived in Boston on Saturday, but his clubs were delayed in Canada, where he missed the cut in last week’s RBC Canadian Open.

A similar thing happened in his only previous U.S. Open start three years ago at Pebble Beach. That year, he didn’t get his clubs until the day before the competition began. This year, a friend assisted in getting them to Boston a day after he arrived.

“There were five other players on my flight,” said Tarren. “They all got golf clubs...I walked around with a wedge on Sunday just to get a feel for the golf course, and then I played 18 on Monday, nine [on Tuesday], and then nine yesterday.”

McIlroy had no such issues.

And his game picked up where it left off at St. George’s Golf Club in Toronto, where he closed with a 62 to beat Justin Thomas by two strokes. It was the same kind of start he had last month at Southern Hills Country Club in Tulsa, Okla., for the PGA Championship. He sandwiched rounds of 65 and 68 with a 71 and 74 on Friday and Saturday to finish solo eighth, three strokes back of the playoff between Thomas and Will Zalatoris.

In April, he shot a bogey-free 64 – his best round at Augusta National Golf Club – on Sunday of the Masters to finish second behind Scottie Scheffler.

On Thursday, McIlroy saved his round with clutch par putts on Nos. 2 and 5 and only a minor hiccup on No. 9, his final hole of the day, prevented the 2011 champion from producing a bogey-free effort.

“It's something to learn from,” said McIlroy, who set or tied 12 scoring records in his U.S. Open victory at Congressional Country Club 11 years ago. “Sitting here talking about the bad stuff when 17 of the holes were really good. I'm happy with the start. I thought my mindset was really good out there.”

Lingmerth, a 34-year-old Swede with two professional victories, the last at the 2015 Memorial Tournament, wasn’t in the field until 2014 champion Martin Kaymer withdrew with an undisclosed injury.

A first alternate from the Powell, Ohio, final qualifier on June 6, Lingmerth came up just short in a 5-for-1 playoff that spilled into the next morning for the final spot that went to Hayden Buckley, who carded a 2-under 68 on Thursday. The former University of Arkansas standout does seem to excel on challenging layouts, including his Memorial win at Muirfield Village in Dublin, Ohio. He’s finished no worse than tied for 21st in three previous U.S. Open starts.

Since he last appeared in this championship – T-21 at Erin Hills in 2017 – Lingmerth has dealt with a variety of maladies that has slowed his progress on the PGA and Korn Ferry Tours.

“There have been some tough days, not going to lie,” said Lingmerth, “and you kind of start asking yourself those questions. But I'm pretty stubborn and I'm not one to give up. Deal with the fact that I am where I am today, and I've just got to try to get better every day.”

From the moment he stepped on the property, Dahmen felt it was a layout where he could contend. While so many venues favor bombers, The Country Club requires precision over power. Averaging 296.4 yards off the tee, which tied him for 82nd out of 156 – Dahmen hit 12 of 14 fairways and 16 of 18 greens, a recipe for U.S. Open success, and he closed with birdies on three of his last five holes.

“You still have to hit it great, and you still have to be in the right spots,” said Dahmen, “but everyone can play this golf course, from [qualifier] Brian Stuard to myself to the long players.”

Daffue, currently fourth on the Korn Ferry Tour’s points list, once played with two-time U.S. Open champion Retief Goosen at age 11, which began a long-standing friendship. While he chatted and texted with Goosen prior to the U.S. Open, he didn’t ask for specific advice.

“He has been sending me encouraging messages [noting that] the ability is there,” said Daffue after his six-birdie, three-bogey performance on Thursday. “It's just how do you put it together and believe in yourself.”

Besides Buckley, past champions Dustin Johnson (2016) and Justin Rose (2013) were joined at 2-under 68 by Brian Harman, Matthew Fitzpatrick, who won the 2013 U.S. Amateur at The Country Club; and qualifiers Aaron Wise and Matthew NeSmith.