Will Bryson go the distance? 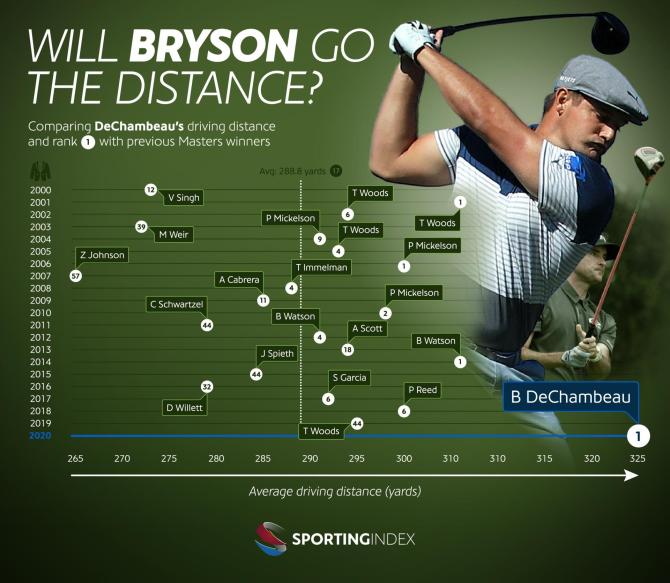 Bryson DeChambeau hits the ball further than any Masters winner has since the turn of the century.

BRYSON DeChambeau hits the ball further than any Masters winner has since the turn of the century, research from betting firm Sporting Index has found.

The tournament favourite, seeking a second consecutive Major title after his US Open win in September, has scaled new heights with his distance off the tee this year, with the 27-year-old averaging a mind-boggling 325 yards in driving distance.

Such figures mean that DeChambeau hits the ball 36 yards further than the previous 20 Masters winners which, over the four days, equates to an advantage of over 2,000 yards.

Hitting the ball far off the tee has proved important in recent years at Augusta, with 13 of the last 20 winners having ranked inside the top-12 for driving distance.

Perhaps unsurprisingly, Bryson ranks first in driving distance this year and there are good omens for players topping that category, with Woods, Watson and Phil Mickelson all first on their way to success in Georgia.

Neville Burdock, Head of Trading at Sporting Index, said: “Bryson DeChambeau is the talk of the golfing world at the moment with his power off the tee a valuable aspect of his game for any course on the tour.

“He heads into this year’s Masters as the favourite and that’s unsurprising, given the stats suggest his long driving will be a real asset at Augusta, with players who can boom it off the tee having plenty of success in recent years.

“Bryson averages 325 yards off the tee in 2020 which is 36 yards further than the average of the previous 20 winners, so he’s clearly got a big advantage compared to his short-hitting rivals.”