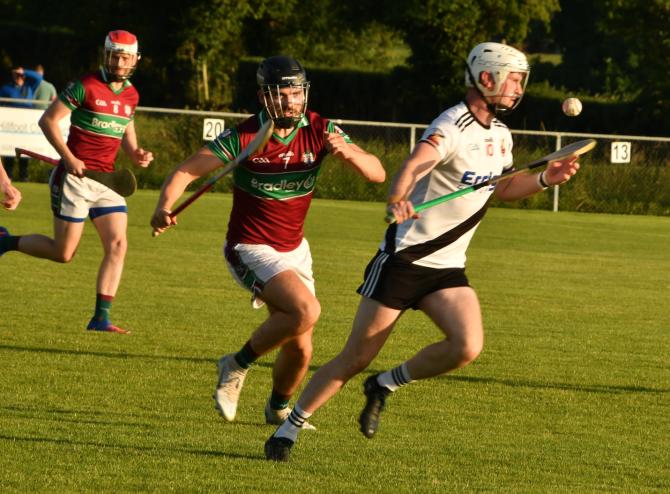 Eoghan Rua and Dungiven are both in action this weekend.

Banagher v Kevin Lynch’s - Owenbeg (6pm, Saturday)
COUNTY AND Ulster Intermediate Hurling champions Banagher have already shocked local rivals Kevin Lynch’s in the league and they will fully intend to put a spoke in their championship wheel as well.
When facing Dungiven teams in hurling or football the Banagher players seem to grow wings for the occasion and this game will draw a bumper crowd in Owenbeg at 6pm on Saturday.
Despite a 2-17 to 2-15 loss to Ballinascreen in a mid week thriller the St. Mary’s will not be found anting.
In the last five years Kevin Lynch’s has been the team that has given Slaughtneil the most problems without ever beating them.
Prior to that Banagher had been toiling against the champions without ever getting over the line as well.
It may not be a classy affair but there will be no lack of passion as the players who know each other inside out battle for supremacy.
Despite that league defeat the Dungiven men will start favourites given the strength of their panel. During the county season the Lynch’s usually provided up to half of the Derry county team that gained promotion to Division 2A.
They have Richie and John Mullan, Mark Craig, Darragh McGilligan and Odhran McKeever who form a strong backbone to the team.
If Banagher are to make it back to back victories the likes of Darragh McCloskey, Oisin McCloskey, Liam Eoin Campbell, Daryl McDermott and fit again Darragh Cartin will need to be at their best.
Former stalwart defender Liam Og Hinphey is back from retirement in the les demanding role as goalkeeper and no doubt he will be directing operations from there.
A boost for Kevin Lynchs is the return of Corey O’Reilly after a spell in Canada and he looked pretty sharp in the opening game.

Na Magha v Swatragh - Owenbeg (4.30pm, Saturday)
Na Magha suffered a heavy opening home defeat to holders Slaughtneil which was hardly a surprise at Eirheart Park.
Na Magha usually ply their trade in the third division of Antrim hurling but they tend to struggle against the strong Derry senior clubs. Swatragh who endured a poor early season have improved dramatically and were most unlucky to lose to Lavey in the opening round.
They led by 2-13 to 0-13 late on. A goal by Sedgae Melaugh closed the gap and then all the good Swatragh work was undone when Ciaran Hendry blasted a free to the net in the dying embers of the game.
Sean Martin Quinn was in top form for the Davit’s in that game hit 1-4. Fintan McGurk had scored their opening goal to give them a 1-5 to 0-6 half time lead.
They will start this game as firm favourites but they will be well aware that the city side have some very goof forwards like Deaglan Foley, Tommy Gallagher and Michael Lynch.
In their game against the champions Na Magha put in a good first half shift when trailing by 0-14 to 0-9 but they faded in the second half and eventually lost by 2-25 to 0-12.
Last year Swatragh lost key games because of poor finishing but the manner in which they pushed Lavey all the way suggests that might be improving in that area.
They look to be the more compact team and should end up on the right side of the result.

Eoghan Rua v Ballinascreen - Owenbeg (1pm, Sunday)
Eoghan Rua lost their opening game to Kevin Lynch’s but still managed to score a respectable 1-13.
New Eoghan Rua manager Ciaran Lagan has turned his young goalkeeper Leo Passmore into an excellent attacker. He hit 1-7 in the defeat against Kevin Lynch’s.
Ballinascreen won the early season league but as the season progressed they seem to have lost a bit of form until they beat Banagher by two points in round one.
Still, with players like Paul Cleary, John McCloskey, Noel Rafferty, Anton Scullion and Aidan O’Hagan they will start firm favourites.
For a club that has produced a lot of good under age teams the ‘Screen just never seem able push on as they should at senior level.
Eoghan Rua have a lot of dual players and this leaves them pretty busy come championship time. Ballinascreen too have their dual players but they have a much larger panel that the Eoghan Rua.
The St. Colm’s look to have more scoring options that the Coleraine men and are taken to win with a bit to spare.
Ballinascreen will be strong favourites to win but Eoghan Rua are battlers and will not fold easily.

Lavey v Slaughtneil - Owenbeg (2.30pm, Sunday)
A Slaughtneil team going for an unprecedented ten titles in a row just look too strong for a young Lavey team now managed by former Antrim star Liam Watson from Loughgiel.
While they are not the title winning force of the nineties the young Guladuff side has been making progress but not enough to make the champions sweat.
Slaughtneil have injury worries with Meehaul McGrath suffering a serious hand injury and top scorer Cormac O’Doherty having undergone surgery on his shoulder.
With young players like Jack Cassidy coming through they are not short on replacements.
Ballycastle man Michael McShane is back as the Emmett’s manager for the eighth successive year. In the previous seven he has steered them to seven county and five Ulster titles.