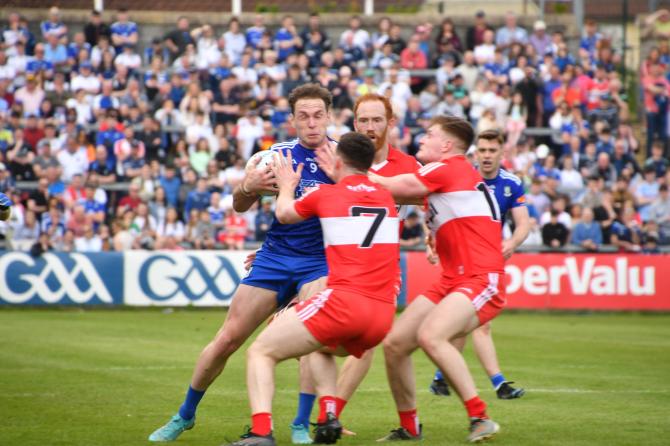 Derry will hope to bring the same intensity to Croke Park that they showed in their march to the Ulster title.

FOR the first time since 1970 Derry will be playing minor and senior championship games in Dublin on the one day, writes GAA correspondent Bernie Mullan.
Unfortunately, they are at two different venues. The minors play Galway at Parnell Park in the semi final with a 1pm start and at 3.45pm, two miles away, the seniors play Clare in a senior quarter-final.
It is then possible for Derry fans to take in both games as it is a direct route from the minor to the senior venue.

Clare must be treated with caution
For the first time in this year’s championship Derry will go into a game as favourites. They meet a resilient Clare team that shocked Roscommon in the qualifiers. They were three points down with as many minutes left but rallied with a successful Keelan Sexton penalty to reach the last eight.
The fact that Derry beat the Banner men in Ennis last February in the league will have no bearing on this match. In that game Derry won by 2-13 to 0-10 but the margin of victory probably flattered them.
Clare are generally regarded as a hurling county. They have won All Ireland titles at all levels. Football is mainly played along the coastal area of the county but quite a number of their 50 clubs play both hurling and football.
Clare would usually have bounced between divisions three and four until Colm Collins took over as manager nine years ago. Since then they have moved up and are now in their sixth year in Division Two. They came close several times to reaching Division One.
This will be the first major meeting of these counties since the National League final of 1947. While the present county players want for nothing the following is an account of that game played on Easter Monday April 7 as the year of the ‘big snow’ began to make way to sunshine.

‘Some of the Derry players made their own way to Croke Park and stayed overnight in a run down hotel where they were nearly frozen to death. Thankfully the weather earlier had got them acclimatised to the cold. Clare led at half time by 1-5 to 1-4. There was just a point between them when Francie Niblock hit a wonder goal. Larry Higgins later to become Monsignor Larry Higgins got the first half goal.
‘The ferocity of the Clare tackling did them little good as Pat Keenan pointed six frees. Derry came from behind on a number of occasions but finished the stronger team. winning by 2-9 to 2-5
‘The all Magherafelt half forward line excelled with Niblock getting 1-2 and Higgins 1-1. The cup was not there for the presentation but was sent up a week later as Magherafelt became the centre of celebration. The team was met by bands and thousands of supporters. There was a ceili held in the town hall in their honour. They were treated to supper by the Magherfelt Rossas club.
‘Prior to that game Derry played in red jerseys but for the final they played in white with a red band which is more or less the colour they still use today.
‘Seventy five years on we cannot forget that history making team which was: Charlie Moran, Glen; Seamus Keenan, Castledawson; Jack Convery, Lavey; Joe Hurley, Lavey; John Murphy, Newbridge; Sonny McCann, Castledawson; Thomas Edward McCloske, Greenlough; Mickey McNaught, Sean Dolans; Roddy Gribbin, Newbridge; Pat Keenan, Francie Niblock and Larry Higgins, all Magherafelt; Paddy McErlean, Greenlough; John Eddie Mullan, Dungiven; Jimmy Cassidy, Greenlough.’

Derry to continue counter attacking system
Derry are unlikely to play any different than they have done in the last three games. Dropping back, closing down the opposition and attacking at pace has proved to a winning formula to date. The vast Croke Park surface will suit Derry whose fitness levels are almost frightening at times. Clare are big and strong with good players in every line and some excellent forwards like Keelan Sexton, who scored 2-6 against Roscommon, Eoin Cleary, Pearse Lillis and Eoin McMahon.
Caolan Russell plays the role of sweeper allowing the likes of Jamie Malone and Conor O’Dea the freedom to push forward.
In front of goalkeeper O’Callaghan big full back Manus Doherty is one of the best in the business. He showed his quality in their victories over Meath and Roscommon. In the Munster championship Clare were beaten on penalties by neighbours Limerick who, in turn, were thrashed by Kerry in the provincial final.
Due to their good league position they were then able to play in the qualifiers where they have since made their mark.
Last year Derry could not buy a goal but this year they have found the key. Three goals against Monaghan and one each against Tyrone and Donegal in the Ulster championship underlines their attacking threat. The over reliance on Shane McGuigan has now gone but the skilful Slaughtneil man is still the key man up front. The other forwards, and indeed a few defenders, are chipping in with scores.
Derry captain Chrissy McKaigue is probably the best man marker in the game. Against Darren McCurry (Tyrone), Jack McCarron (Monaghan) and Patrick McBrearty (Donegal) he closed them down with only McCurry getting a score from open play.
Brendan Rogers, a superb athlete, will drive forward to join the attack as will Connor McCluskey, the find of the season operating at corner back. Wing half backs Conor Doherty and Padraig McGrogan will mind the house while the more adventurous defenders push forward. Given the impact that Brendan Rogers made when he moved to the middle of the field Derry no doubt will have plans to give him a lot of freedom.
Gareth McKinless is usually listed at centre half but tends to end up at midfield with Shea Downey filling the space. One of the team’s longest serving players, Emmett Bradley, has proven to be a great man to come off the bench and take scores.
Benny Heron is having a new lease of life at 32 and is a proven goal scorer. Niall Loughlin had been struggling with injury and had to come off after fifty minutes in the Ulster final but by that time he had scored 1-2. Hopes are high that he will be fully fit for Saturday.
Conor Glass does a lot of unseen work from his midfield berth, he drops back to cover space this allowing McKinless a free hand to drive forward. Like others on the team he is a superb athlete and his experience in Aussie Rules makes him exceptional under the high ball.
The return to full fitness of Oisin McWilliams is a further boost. He suffered a broken jaw against Galway and missed the end of the league and the first two championship games. He came on as a sub against Donegal late in the game and looked up to the mark. He is the type of player who can play anywhere from midfield up.
One player who is badly missed is Slaughteil’s Padraig Cassidy who has played little football this year due to a groin injury. Last season he had been a key member of the team and is currently awaiting surgery. Those who hint that Derry do not have a strong panel are wide of the mark. Paul McNeill is a top class defender. Conlann Bradley is an excellent goalkeeper, Ben McCarron and Lachlan Murray are two exciting young forwards as is Matthew Downey who captained Derry to the 2020 minor title. The 6’4” Anton Tohill now back from his Aussie Rules adventure may lack game time but his sheer physique indicates that he is an asset for the near future. Mark Doherty the younger brother of Conor has been making huge progress through the ranks. While only 26 can be listed on the match day programme Eoin McEvoy, Callum Downey, Donncha Gilmore and Declan Cassidy are putting the same work as the starters and subs.

Growing fan base
Not so long ago Derry would have been lucky to get a few hundred at their games but now the number of supporters has virtually mushroomed. Big following at the Tyrone and Monaghan games was superseded by some 15,000 flag bearing supporters at the Ulster final.
The increase in support is basically down to the amazing work that clubs do in coaching and developing under age players. Go to any club on a Saturday morning or an evening when they have no games and you will see hundreds of boys and girls being put through their paces. They get to know the players so when it used be just dad who went to the game it is now mum, dad and the kids.
During the summer Cul Camps county players will be going around the clubs to pass on their knowledge to players of the future.
The winner of this game will play the winners of Armagh and Galway who grace Croke Park on Sunday so three of the four teams on that side of the draw will fancy their chances of reaching the final. The bookies seem to be wary of Derry. Before a championship ball was kicked they were 66/1. Now they are third favourites at 8/1.
Derry could not have got a better draw The management hake kept their feet firmly rooted to the ground since the Ulster final. there might be a worry that Clare have had two games since Derry picked up the Anglo Celt Cup on 29th May. They will probably have a go at Derry from the start but Derry will circle the wagons and then hit on the break. Derry look to be in a very good position to reach their first semi final since 2001.
Derry rarely change their starting team and it is likely to be Odhran Lynch, Chrissy McKaigue capt. Brendan Rogers Connor McCluskey, Conor Doherty, Shea Downey, Padraig McGrogan, Conor Glass, Gareth McKinless, Paul Cassidy, Niall Toner, Ethan Doherty, Benny Heron, Shane McGuigan, Niall loughlin.