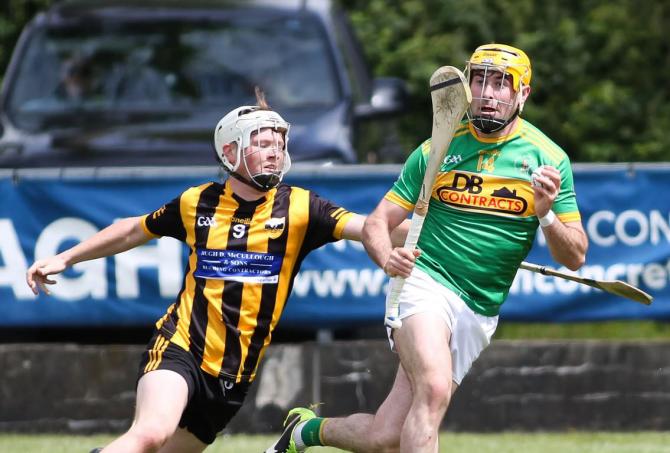 Dunloy's Deaglan Smyth in action during his team's league win over Ballycran at Pearse Park. Pic by Brendan McTaggart

Dunloy recovered from eight points adrift just after half-time to record a six point win over Ballycran in the Antrim senior hurling league in a game where the strong wind played its part.

The visitors were well worthy of their seven point half time advantage. The Cuchullains were restricted to just three points in those opening 30 minutes while their first score didn’t come until the 12th minute of the game.

The home side regrouped at the interval, however, and played more to their abilities in the second half. They were helped with Ballycran being reduced to 14 players, Michael Hughes seeing red just three minutes after the restart.

The only goal of the game came seven minutes into the second half when Deaglan Smith finishing an excellent move that halved the Ballycran lead while Nicky McKeague’s accuracy from frees allowed the home side to chip away into the Ballycran lead.

The Dunloy midfielder would top score with eight points beside his name, seven from placed balls, while Gabriel McTaggart’s four points was just reward for the mountain of work he had gone through.

With county players Ryan Elliott, Aaron Crawford and Phelim Duffin all making a return to the Dunloy starting team, the Cuchullains defence was stronger than it had been in recent league games, yielding just 13 points in an hour of hurling with a number of those coming from distance in the first half while just four werefrom placed ball. The Dunoy full back line, in particular, were tenacious throughout.

On a day when graft and work rate were king, style and finesse came second. Ciaran Elliott, Kevin Molloy, McTaggart and Eoin McFerran all rolled their sleeves up for the home side.

Ballycran will look back at the opening 30 minutes to this game and realise this is where they gave it away. So many glaring misses at a time when they were well on top allowed the Cuchullains to remain in touch.

Defensively, they were organised and astute in possession. Conor Woods was immense at half back while he was ably assisted by Aaron Dorrian and Gerard Hughes before he had to go off injured. Phelim Savage was at his impish best and had an intriguing battle with Ciaran Elliott in the middle of the field.

Up front, Stuart Martin and Scott Nicholson did the lion's share of the scoring for the Ardsmen - Martin with the first three points of the game while Nicholson gave the Dunloy defence plenty to think about.

The momentum visibly swung after Ballycran were reduced to 14 men. The visitors led by eight points at that stage and nine minutes later the home side were back on terms. A run of a goal and seven ponts without reply gave them the confidence they needed as the Down side gradually fell away.

McKeague’s frees, defensive dominance and some glittering scores from McTaggart in the final quarter allowed Dunloy to record their third win in seven outings but they still are too near the bottom for comfort, in ninth spot, just ahead of two others, with just half a dozen league points.