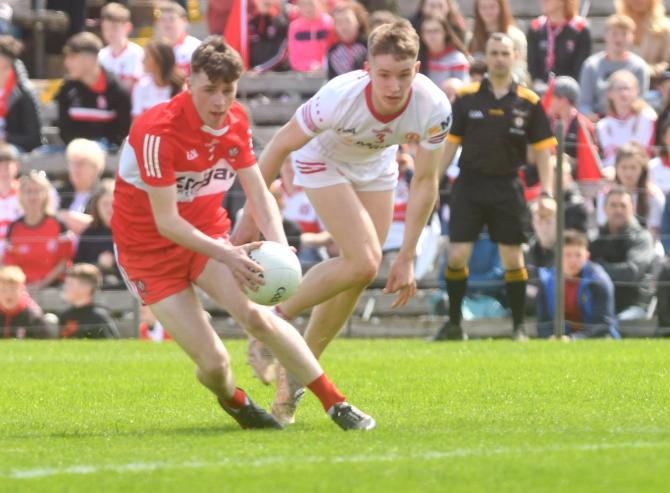 Derry Minors bidding to make a return to Croke Park for the All Ireland final.

DERRY minors can expect huge support at Parnell Park when they take on Galway in the All Ireland minor football semi final, writes Bernie Mullan.

Given the timing and the geographical location it is easy for the hordes of Derry support to take in both games.
Both Derry and Galway are surprise semi finalists: Derry had an easy victory over Munster champions Cork while Galway caused an even bigger shock by beating Leinster champions Dublin 0-10 to 0-7.
Minor football tends to be unpredictable with Mayo the only provincial champions to reach the semi-final. They had beaten Galway comfortably in the Connacht final by 0-13 to 0-7. Galway beat Sligo by 3-15 to 1-13 in the semi-final but there is one curious result in their locker. In the ‘round robin’ they lost to little Leitrim by 3-8 to 0-12.
Derry started off with a brilliant display in beating Armagh away by 5-10 to 2-6. In the next round they suffered a huge set back when their brilliant captain Ryan McNicholl got a season ending injury against Donegal after seven minutes by which stage he had already scored a goal.
Cavan, who proved to be a good side, provided the Ulster semi-final opposition and even far below their best 14 man Derry still won by 0-15 to 0-11. In the Ulster final the concession of four goals proved too much against the holders Tyrone who scored 4-8 to Derry’s 0-16.
They quickly got that loss out of their system at Portlaoise with a splendid 0-12 to 0-6 win over a fancied Cork.
Back in 2007 Derry and Galway met in the minor final and a late Galway goal saw the Tribesmen fortunate winners by 1-10 to 1-9. Fifteen years on the current Derry senior captain is Chrissy McKaigue who played right half back in that game.
In their three point win over Dublin the Galway boys could afford the luxury of a missed penalty.
One of their scorers that day was midfielder Shay McGlinchey whose family have strong links with Bellaghy. Notably, they had nine different scorers with only Fionn O’Connor scoring twice. Dublin had won all their Leinster games by eight points or more. They finished with 14 men after Luke O’Boyle picked up a second yellow card early in the second half. Through their Connacht journey Galway lost three of their six games.
This Derry team is very well managed by a relatively young group with Martin Boyle the manager assisted by Darren McShane. Stephen McGuigan and James McNicholl make up the quartet.
Derry have been strong in minor football in the last eight years when they have contested six Ulster finals, winning three. They have a good squad of skilful players and on any given day a different player can pop up as the star man. It was Danny McDermott against Cork, Cahir Spiers against Tyrone, Johnny McGuckin against Cavan and Cahir Higgins against Donegal.
They are very strong at midfield where Ruairi Forbes is a powerful and intelligent player alongside Dara McPeake, son of former Derry senior player Benny McPeake. Centre half back Odhran Crozier is a great long distance free taker but perhaps the most remarkable player on the team is corner back Fionn McEldowney. Despite his lack of stature he can blot out star forwards with brilliant tackling and ability to set up counter attacks.
There is no good reason why Derry cannot progress to the final and face the winners of Mayo and Kerry. Their expected line out is Ben O’Connor, Fionn McEldowney, Jack Scullion, Danny McDermott, James Murray, Odhran Crozier, Shea Birt, Dara McPeake, Ruairi Forbes, Johnny McGuckin, Conall Higgins, Cahir Spiers, Eoin Higgins, Ciaran Chambers, Odhran Murphy.