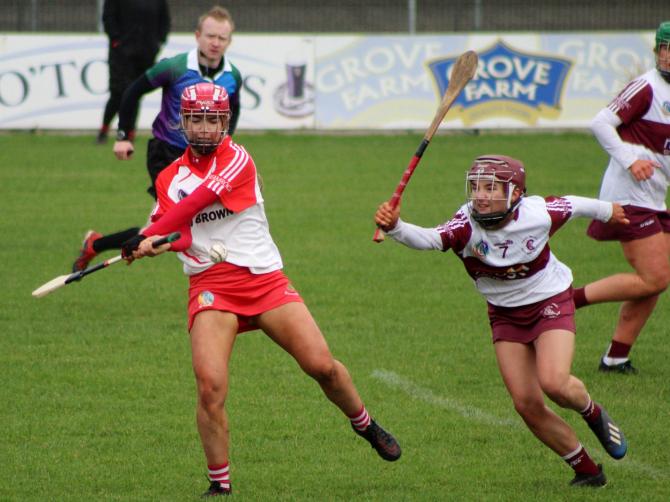 Action from Loughgiel's win over Ballymacnab in the semi-final of the Ulster Junior Camogie Championship semi-final in Armagh. Pic by Darrach O'Mullan

BOTH Shamrocks Loughgiel and Eoghan Rua Coleraine booked their final places in this weekend's Ulster junior camogie championship but in very different fashions.

The Antrim champions were pushed all the way, needing extra time to determine their fate, while the Coleraine side blew their semi final opponents away, holding them scoreless in a rather lop sided affair.

A two goals and a point blast during the final quarter saw the Armagh side squeeze past the Shamrocks before Orlagh Laverty came to their rescue with a late point taking the contest to extra time where the deal was finally sealed.

The drama all happened in the first period of extra time where, following an exchange of points, scores from Una McNaughton and Katie McKillop did the trick, with both sides failing to find the target in the concluding ten minutes.

The Shamrocks started the game brightly cruising into a 1-3 to 0-1 lead with Ciara Connolly forcing the sliotar over the goal line after good work from Laverty.

However, their progress was disrupted after the water break with the Armagh girls coming right back into the game with three points shared by Eimar and Laura Smyth.

The Antrim champions moved up a gear during the third quarter to lead by six, 1-8 to 0-5, going into the second drinks break thanks to further points from Laverty, McKillop and substitute Ciara Dobbin.

Looking comfortable at this stage the Shamrocks very nearly came a cropper, failing to find a score as the Ballymacnab side hit them with everything.

Goals from Eimear Smyth and Ellie McKee put a completely different complexion on the game and when Smyth whacked over a late point the Armagh champions appeared to have caused a major upset.

Laverty's saving point came late in the game, taking the sides to extra time where Loughgiel eventually got the business done.

There was no such drama at Portstewart where Eoghan Rua ran riot. Things don't get any easier than this with Mayobridge offering absolutely no resistance as they failed to register a score during the hour.

The Coleraine girls shot nine wides against the breeze in the first half and had only scored two points by the 24th minute.

A couple of quick goals did the trick, Katie Mullan setting up Grainne Holmes for the first with the Ireland hockey international hitting a second a minute later and it was curtains.

Holmes also shone in the second half, converting five frees and adding a sixth from play as the sent the Down champions home in disarray.

The Coleraine scores were shared by just three players - Homes top scoring on (1-7), Mullan adding (1-3) and Roseanna McAleese picking up the final point.

The final takes place at Portglenone on Saturday and we will have report and pics from the decider in Tuesday's Chronicle editions...