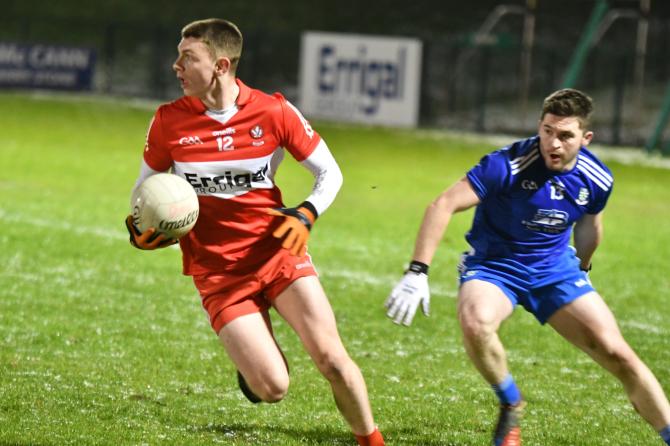 Matthew Downey impressed in his debut senior outing for the Oak Leaf county in the draw with Monaghan.

DERRY'S senior gaelic footballers will look to build on the promise of their opening day draw with Monaghan when they resume their Dr McKenna Cup campaign this weekend.

Manager Rory Gallagher will be back on familiar ground as the Fermanagh native takes his players to Roslea for a third round meeting with the Erne county, throw-in 1.30pm.

The Oak Leaf side earned a credible draw with Monaghan at Celtic Park in their opening game earlier this month and will be keen to build on that encouraging performance.

Their opponents, meanwhile, sit bottom of Section C having lost their opening game against the Farney men and need a win if they are to retain any interest in the competition.

In their opening game against Seamus McEaneny's side, Derry looked like they were going to finish with nothing until the last minute of added time.

Then, wing back Ethan Doherty stole in behind the Monaghan defence, took a Matthew Downey pass and with the goals at his mercy he took the safe option of popping over a point to level the game.

With the Owenbeg playing surface near perfect apart from a slight covering of snow on the stand side both teams, with a few debutants on board, played a fast and attacking brand of football.

Derry led by to two the break but really should have been well clear. Late call up Michael McEvoy missed a sitter after Niall Toner’s shot had come off the butt of an upright while Paul Cassidy could have done better with only keeper Bggan to beat.

Then, when Niall Loughlin punched a cross towards the net, Rory Beggan made a brilliant save at the expense of a point.

For a season opener both teams looked fit and sharp with some passages of real quality play. Admittedly there were a few misplaced passes, mainly by the Derry forwards, but defensively both were excellent.

Niall Loughlin was the best of an attack that saw debutants Matthew Downey and Lachlan Murray show promise.

Division One side Monaghan had players on the bench who were able to turn the game when Derry were four points clear.

Derry, on the other hand, didn’t make any changes until late on. Anton Tohill, back from a stint in Aussie Rules, was introduced. At 6’5” he towered over the Monaghan defence and he looks to be a very interesting call-up to the Derry panel.

Rory Gallagher handed out five debuts during the game. Matthew Downey and Lachlan Murray were on the starting fifteen while Anton Tohill, Dan Higgins and Eoin McEvoy came off the bench in the latter stages of the game.

So, an interesting game in prospect then in Roslea on Saturday.

However, Derry's great scoring power and cohesion under boss Gallagher should see them record their first win of the new season.