Crowd in excess of 10,000 expected to converge on Celtic Park for eagerly anticipated Derry SFC decider 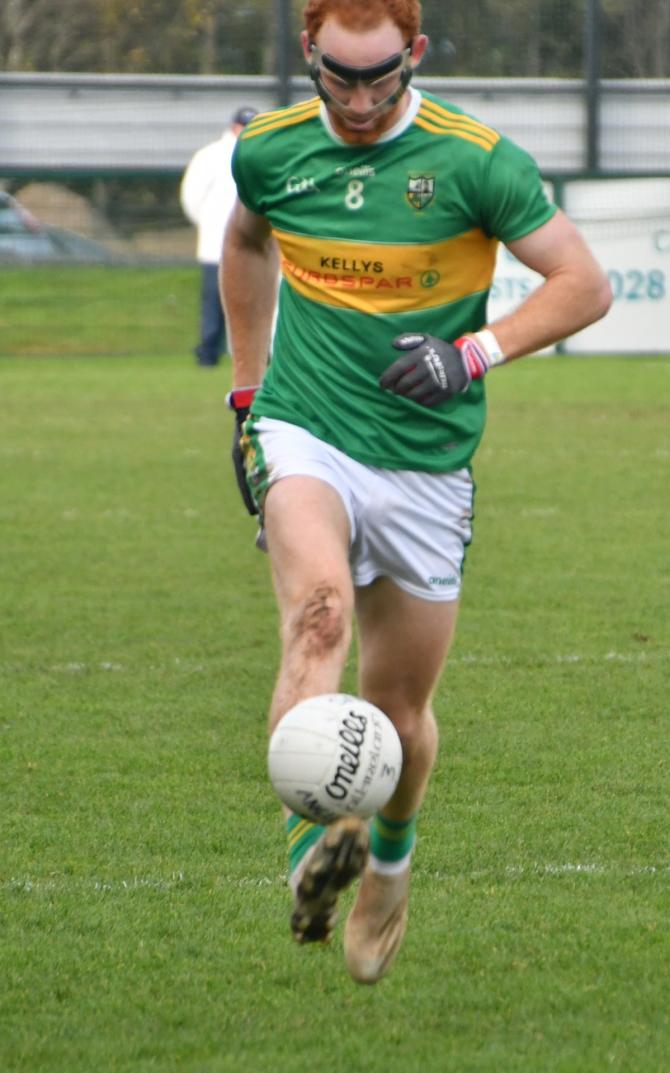 Conor Glass, wearing a specially fitted face mask because of a facial injury, will be pivotal to Glen's hopes of landing a first Derry SFC title this weekend.

They were the hottest of favourites to beat Magherafelt but they came up short on the day.

Now, after demolishing all opposition along the way, they are in the final again.

This time, their highly regarded manager Malachy O’Rourke will have their feet firmly planted on the Celtic Park ground before referee Sean Curran throws in the ball.

Standing in their way is none other than their neighbours from Slaughtneil who have won five of the last seven county titles and three provincial titles as well.

Slaughtneil have been hit with injuries and they do not have the same depth in their panel as the opposition. What Slaughtneil do have, though, is a battle hardened group of men who will want to keep the neighbours in their place.

In the semi-final last year, which was also played at Celtic Park, these teams clashed. A brilliant display from Shane McGuigan carved out a three point win. They then went on to beat Magherafelt comfortably in the final by 0-11 to 1-4.

Slaughtneil have had a few tough battles to get to the final. In the qualifiers they lost to Lavey by three points. In the knockout stages they had to come from five points down to beat Coleraine.

In the semi final Lavey took them to a extra time but Paul Bradley’s men showed why they are champions by outscoring the young pretenders by four points to nil.

While Slaughtneil have made the final the hard way the same could not be said of Glen who simply crushed all opposition put in front of them.

While they are seen as an attacking force it is worth taking a look at their defence. In the three knockout games they conceded eight points against Foreglen, three against Magherafelt and five against Loup.

On the plus side they have scored 5-17 in these three games. Their quality cannot be questioned.

Maybe the holders will have benefited from those tough encounters with Lavey and Coleraine which kept them on their toes.

Slaughtneil know what it takes to win titles. Glen will know after this game if they are ready to be the new dominant force in Derry football.

An attendance in excess of 10,000 is expected at the city venue. Two years ago that figure was exceeded when Glen met Magherafelt. This is a dream pairing for Derry GAA fans and those beyond.

Pace is a vital ingredient of any on field sport and Glen have it in abundance. Malachy O’Rourke has remodelled this Glen team into an all out attacking unit.

The half back line is composed of players who would usually be half forwards and half backs are now full backs. They have scoring potential in every line and most attacks start from the excellent kicking out of former outfield player Connlan Bradley.

Paul Bradley and Gavin Devlin on the Slaughtneil sideline will give the Glen defence their biggest test to date by playing the long ball into their deadly duo of Shane McGuigan and Christopher Bradley who scored 1-12 between them against Lavey.

Both can win the ball be it high or low and the Glen defence does not have a designated man marker. Michael Warnock is likely to match up with Bradley and Ryan Dougan with McGuigan.

Glen might have a worry over Dougan who limped off late in the game against Loup and he had a heavily bandaged thigh starting the game.

They will try to isolate Glen’s play making centre half Ciaran McFaul by using the wings. In the early stages expect them to pack their defence and not allow Glen to settle early.

While Glen may win the midfield battle through the Derry county duo of Emmett Bradley and Conor Glass they will not have things their own way against Patsy Bradley and Padraig Cassidy.

Defensively, Slaughtneil look the stronger. Their full back line of Paul McNeill, Brendan Rogers and Karl McKaigue are proven county players. Their centre half Chrissy McKaigue is the county captain and on his left Keenan Feeney is a fine attacking wing back.

The likely absence of Cormac O’Doherty is a set back to the champions attack but they will just love the underdog tag.

Glen’s superior pace and youth gives them an advantage. They will have the hunger for a long awaited title and it looks to be in their own hands.

Slaughtneil have the ability to win tight games but those years of tough encounters in football and hurling might just have blunted their edge.