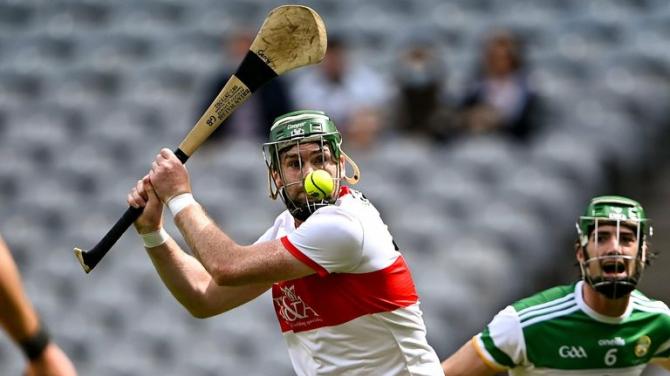 Champions Slaughtneil will be able to call on their county players when the Derry SHC gets underway this weekend.

THIS weekend sees the county's hurlers step centre stage with the opening games in the Derry Senior Hurling Championship.

Though the Derry senior hurling championship has become a one horse race in recent years the Derry Competitions Control Committee are going ahead with the new style group stages.

When the knockouts are reached then the winners of the senior, intermediate and junior champions will emerge.

Slaughtneil have won the last eight titles and they seem to be moving further ahead of the challengers as the years go on.

When they started their run in 2013, closing a 13 year gap, they would have faced stiff challenges from the likes of Banagher and Kevin Lynch’s.
Apart from Slaughtneil, the last team to take the cup was Swatragh in 2012.

While the two groups of four will give the teams extra games, the outcome may not be different from the past eight years.

Kevin Lynch’s look to be the main challengers but there has been encouraging signs from Lavey and Swatragh in the league.

With their county players gradually returning, the reigning champions should be at full strength for the opening game of the championship.

Ballinascreen have always had good under age teams but bringing them through to adult level has been a problem.

They do have good players like Anton Kelly, Anton Scullion and John McCloskey but probably not enough balance in their team to cause the holders any undue problems.

The Slaughtneil team is more or less made up of county players and they are strong in every line.

The scoring power of Cormac O’Doherty, Brendan Rogers and Brian Cassidy should see the Emmett’s win with something to spare.

When these teams met in the league last year it ended in a draw.

Neither team has been causing much excitement this year so far but this game is expected to be close.

Both sides are laced with dual players and will be pretty familiar with each other.

The Coleraine team is led by Sean Leo McGoldrick, who is their main scorer for the past decade.

Banagher have a lot of very experienced men but it is one of the younger players, Liam Og Campbell, who has been pulling the strings in attack.

If Banagher can limit the influence of Sean Leo they should win.

There has been distinct signs of improvement in a youngish Swatragh team this year and, with home advantage, they will be strong favourites to get the points.

The loss of Alan Grant has been a major setback for the city side who get loads of action between the Derry and Antrim leagues.

Na Magha have shown improvement in under age competitions over the last two years and in time should be a much stronger force.

Deaglan Foley and Patrick Nelis are current Derry senior players but the Swatragh team are a tight knit group and have always got the better of Na Magha in the past.

Sean Martin Quinn has been in high scoring form for the men in green and white hoops and he should lead them to a comfortable victory.

This was once a great rivalry when hurling fans would come from far and near to see players like Geoffrey McGonigle and Ollie Collins in action.

It will still be an interesting encounter between two fairly young teams.
They are currently level on 11 points each at the top of the league with one game to play.

The Lynch’s have the advantage on a much better scoring average.

Lavey have been the big improvers in this league and there are signs that they are now the third best team behind Slaughtneil and Kevin Lynch’s.

For much of the league the Dungiven men did not have their county players but now at full strength they will be firm favourites for an opening win.