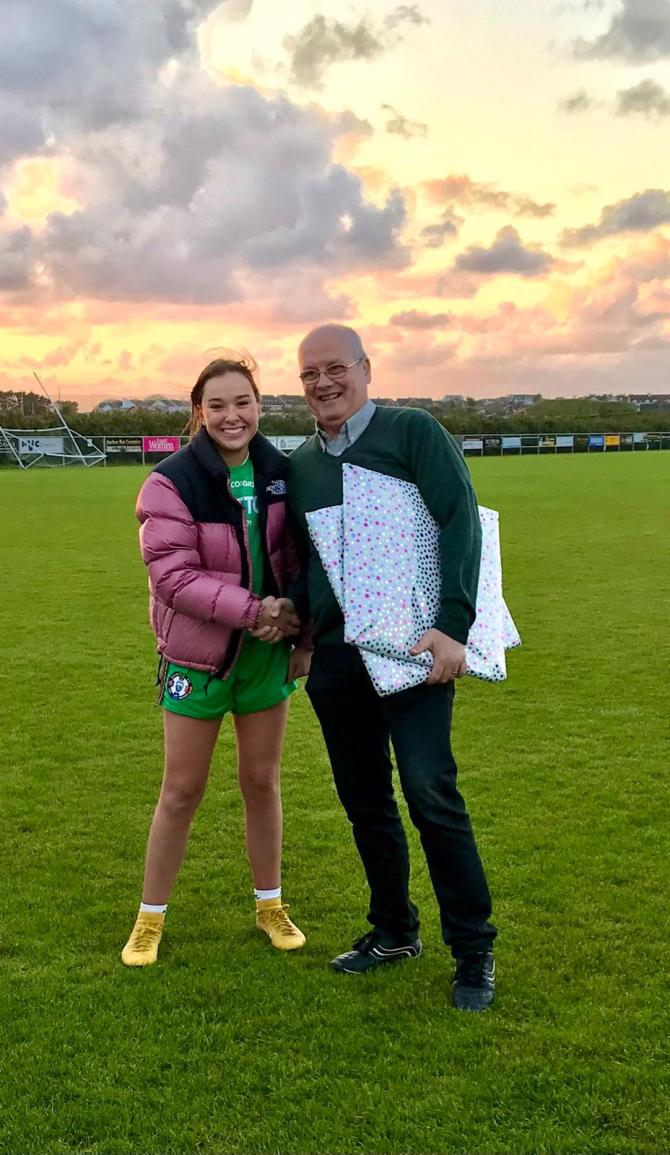 PAUL Grant moved to Portstewart from Warrenpoint via Belfast in May 1993.

Paul and his family settled in Portstewart and he quickly became a member of the Eoghan Rua GAA club where he donned the maroon and green jersey as a senior player for a few seasons.

In December 1993, Paul took on the role of treasurer for the club, a role that he continued to do for most of his 27 years with Eoghan Rua.

Among his other roles over the years was running the lotto, the club shop and looking after all the administration that goes along with ladies gaelic football.

It is within this last position that Paul leaves an indelible mark on the club.

While Paul’s two eldest daughters played camogie it was Brenda who was keen to play ladies football.

So when the Gaelic 4 Girls initiative was brought to the Eoghan Rua club committee in 2011 Paul was keen to get the club involved.

The initiative was aimed at U14 players and the response from girls was extremely encouraging.

The girls played in G4G events, capped off by a day in Croke Park in early 2012.

The U14 All Ireland Feile hosted by Derry came hot on the heels of that and ladies football was firmly cemented at Eoghan Rua.

The U14 girls even got an invite to play at Kilmacud Crokes ladies Sevens tournament in September of 2012 following their display at the Feile.

Nine years down the road and Paul has been the central character in ladies football.

Himself and Anne Morrison have continued to senior level with a good proportion of the same girls who commenced in 2011.

There have been several additions and leavers to this group but it is a testament to the club and the senior coaches that a strong core of girls have been there from the start.

A few trophies have been claimed along the way at U14 and U16.

Paul also coaches the minor team and has lent a hand with all age groups when they are short of coaches.

Everyone in Eoghan Rua knows that if you need information on ladies football Paul is the person to ask.

Not content with taking on roles within the club, it wasn’t long before Paul became involved in county football.

Over the past five years he has coached U16 and minors for the county.

He has also been county secretary and county registrar. He never seems to stop!

His passion for GAA is in no doubt and while he gives Eoghan Rua his all, he is very much an avid Down supporter and it is back to Down that Paul and Carol are heading.

Paul leaves Eoghan Rua ladies football in 2020 with the team competing in the A league, having won the league in 2019.

After a fantastic win against Ballerin at Junior championship the girls now move up to the Intermediate championship.

There is a flourishing underage network and the club has girls competing at U12, U14, U16 and U18. The senior ladies will continue under new management and we all know Paul will keep an eye on their progress from afar.

He will be missed by so many in Eoghan Rua but the biggest hole will be in ladies football.

Few clubs in Derry have four successful codes and Eoghan Rua is proud to have all players represented and represented well.

Paul is a true Gael and a shining example of how volunteers can make a difference in the world of GAA.

His legacy will continue on at Eoghan Rua and he will be remembered by so many for a long time to come.