Special feature: GAA writer Bernie Mullan, in a new series of articles, looks at the history of Gaelic Games in the Oak Leaf county. 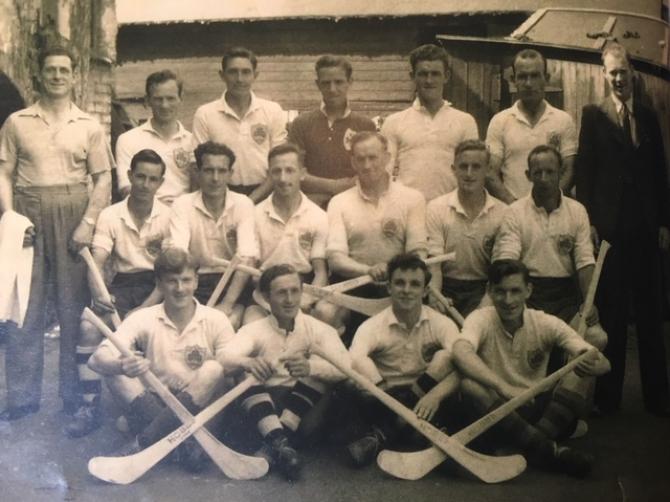 The Mitchel's hurling team. Photograph taken in Mullan's Yard, Coleraine. Pic courtesy of 'And Some Fell on Stony Ground,' the story of Eoghan Rua CLG.

WHILE there are no records to show there may have been a team of sorts in the area in the thirties there certainly were players with the skills of Gaelic football.
The reason being, that when the Magilligan club was formed in 1939, nearly half the team came from Coleraine. Some may have learned the cut and thrust of the game at the Garron Tower or St. Columb’s colleges. A Coleraine man with Magilligan named Cahir O’Doherty captained Derry in the late thirties.
A hurling team based in the Killowen area of the town ws formed in the forties. They played in the city hurling league and won the county title at the expense of Lavey in 1945. They were also crowned county champions in 1948.
They were known as John Mitchel’s Coleraine and inspired by a Tipperary man, Master Holloway, who came to teach in the town. The first organised football club was formed in the town in 1950. They seem to have been an extension of the hurling club as they were based in the St. John’s parish on the other side of the Bann.
They played in the North Derry league until 1954 under the name of Coleraine Shamrocks. Most of the people behind this club were to the fore when the present club was formed. The men were Frank Molloy, Hugh Mullan, Kearney Brolly, Harry Creelman, Bernard O’Kane and Kevin Doherty.
Interestingly, the present club started as St. Malachy’s. They played in the St. Malachy’s field behind the church and parish hall. At a time when a lot of clubs had their grounds dotted with cow droppings and rush bushes, the St. Malachy’s pitch was one of the better ones. Cows seldom grazed on urban ground!
In 1956, the first annual general meeting elected Kearney Brolly as the chairman. A year later it was a lot more formal with a strong looking committee reading Chairman Kearney Brolly (who ran a pub in Market Street), Vice Chairman Hugh Mullan, Secretary Brian Kneeland, Assistant Secretary John Loughery and treasurer, the watchmaker Tommy McKay.
Co-opted on to the committee were James P Mullan, John Campbell, Paddy Reid, a fireman originally from Greenlough, John Gillen and Charlie Sweeney, who had previously played with Magilligan as a schoolboy.
They certainly had quality in their first two years. Their teams included Patsy Breen and Brendan Murray. When Derry played Dublin in the 1958 All Ireland final Breen, back with his native Desertmartin, was right half back and Murray, back with is starting club Ballerin, was centre half forward.
Breen went on to play with Ulster. Murray had started his career with Ballerin but despite being still a registered player with the Sarsfields played with Coleraine in 1957, the year that Ballerin won the Derry senior championship. Next to Jim McKeever, Murray was a brilliant high fielder and nearly as good.
When Brian Kneeland was elected to the committee everything had to be done above board. No shortcuts were allowed. In 1964 the North Derry Convention was held in Ballerin. Brian was one of the Coleraine delegates. The financial report consisted of just the balance which was favourable.
Brian asked the innocent question: “Where are the North Derry Board finances kept? Willie Harkin, who was treasurer, quickly retorted: “They’re in my hip pocket if you want to count them.” No further questions were asked!
Willie held the position for an amazing 52 years between 1956-2007. By then, the board was 30k to the good so Willie’s hip pocket must have been bulging!
The North Derry Board, to the regret of many, was disbanded along with the South Derry Board and all competitions centralised.

Chance Missed
I remember a chance conversation I had many years ago during the course of my work with one of the Coleraine hurlers of that era. His name was Loughery (George?) I think. He worked in the docks.
He reminisced about how a chance was missed for the club to buy their own field in the late forties. One was up for sale and situated just past the Loreto Convent but they could not get enough support from others in the club.
Generally then, clubs barely had enough money to keep going, even when using a rented field. It would be another 64 year before the dream was finally realised when a permanent GAA ground was opened in the Triangle area.

Next time: The Men Who Kept the Flame Burning.