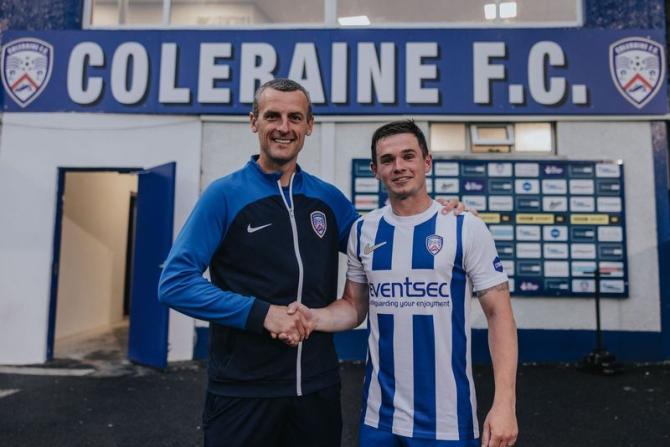 COLERAINE FC can confirm that the transfer of Michael McCrudden has now been completed.
The striker arrives from Cliftonville for an undisclosed fee and has agreed terms on a two-year deal.
A proven goalscorer in the top flight, McCrudden started his career with Newcastle United before returning home to sign for Institute.
The 31-year-old would then join Ballinamallard United in 2015 before returning to Institute and he would help the Drumahoe based club return to the Danske Bank Premiership in 2017-18; a season where he was named as the Championship Player of the Year.
The Gobnascale native would also collect other personal accolades as he was named as the NIFWA Player of the Month in both December 2018 and April 2021, as well as securing back-to-back Goal of the Month gongs.
McCrudden would then seal a move to Derry City in February 2019 but his spell at The Brandywell would only last twelve months as he made the switch to Cliftonville, where he helped the Reds win the County Antrim Shield less than a month after arriving.
Coleraine boss Oran Kearney spoke of his delight at securing the services of a player he has tried to sign before.
“I’ve joked with him that it’s the third time I’ve tried to sign him but thankfully we have got this one over the line,” he said.
“Even with the training sessions he has completed, his quality is there for all to see and I think he will be a very good player for us.
“It is going to take a few weeks to get him up to speed, it won’t be a mad rush but with every week and month that passes he will be sharper and sharper.
“We are delighted that Michael is here and we are looking forward to working with him.”
The Club can confirm that McCrudden will wear the number 10 shirt.