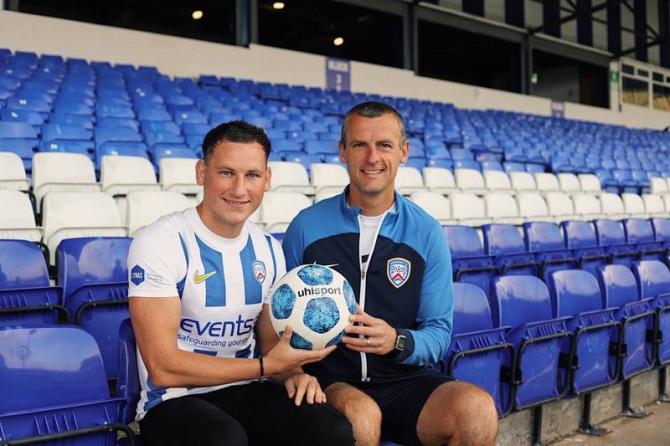 COLERAINE FC is pleased to confirm that an agreement has been made for the transfers of Michael McCrudden and Conor McDermott for an undisclosed fee.
McDermott has put pen-to-paper on a two-year deal and joins after a three year stint at Cliftonville.
The 24-year-old started his career at Derry City before joining the Reds on a short-term loan deal in June 2019.
That move would be made permanent in January 2020 and he helped the Reds win the County Antrim Shield, as well as appearing in European competition.
Coleraine boss Oran Kearney believes his latest acquisition adds serious quality to the squad for the challenges ahead.
“Conor is only 24-years-old but you can see he’s a really good defender,” he said.
“He’s really good going forward and can play at both right-back and centre-back.
“It gives us that bit of versatility and cover for Lyndon that we probably haven’t had for quite some time.
“Ideally you want competition for places and it keeps everyone on their toes and Conor ticks a lot of boxes with his versatility.
“I think he’s in good shape but he needs to get back on the pitch and get some minutes under his belt.”
The club can confirm that McDermott will wear the number 25 shirt.
Furthermore, Coleraine FC can reveal that a deal has been agreed for the services of striker Michael McCrudden.
Club officials hope to unveil McCrudden early next week and will be communicated in due course.