Striker looking for another club following departure from the Showgrounds 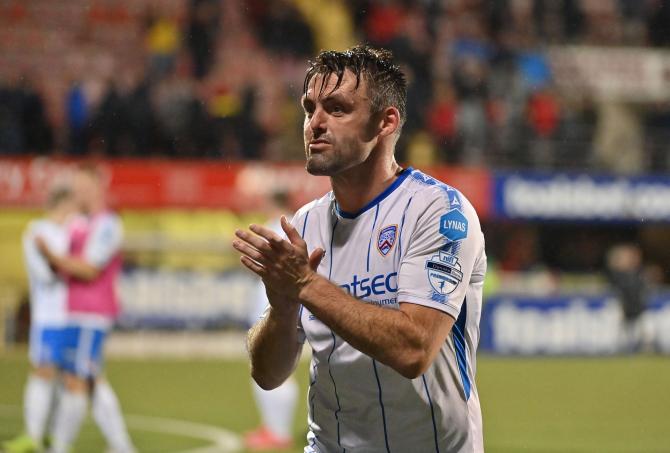 EOIN Bradley's time at Coleraine has come to an end.

The striker hinted at his departure in a social media post on Wednesday morning and the news was later confimed by Bannsiders' boss Oran Kearney.

The schoolteacher admitted it had been a difficult decision not to renew Bradley's contract once his current deal expires at the end of this month.

'Skinner,' who first joined the club in the summer of 2013, made a total of 222 appearances for the Bannsiders, scoring 55 times in the process.

The former Derry GAA star spent a season at Ballycastle Road before joining Glenavon where he helped the Lurgan club lift the Irish Cup in 2016.

He returned to Ballycastle Road in January 2017 and went on to become a firm fans' favourite, scoring an unforgettable goal as he helped the club win the Irish Cup in 2018 with a 3-1 win over Cliftonville.

Bradley has also won the Bet McLean League Cup in his second spell and played eight times in Europe, including netting in the penalty shoot-out win against NK Maribor.

Speaking to the Coleraine FC website, Oran Kearney admitted he had agonised over the decision to let Bradley go.

“Skinner has absolutely been a great servant to Coleraine FC,” he said.

“I’ve openly admitted to him and others that it was my mistake to let him go back in 2014 but across his two spells he has been outstanding, the second spell in particular.

"I remember he was signed alongside Ciaron Harkin and it seemed to light a switch as we went on a serious run and he has been a massive part of our success.

“In recent years, we have won the Irish Cup, League Cup, finished runners-up and had some memorable games in Europe and Skinner has been at the forefront of that both on and off the pitch.

“It was a really tough decision and the biggest compliment I can give him is that there wouldn’t be so much mulling over another player at his age to push and go again.

“The term 'club legend' is used very easily but when you factor in the success we have had in recent years, you can’t deny that Skinner has been a big part of that.

“He's had many big moments in a Coleraine shirt and will be fondly remembered for ‘that’ goal in the Irish Cup final.

“A huge personality both on and off the pitch, Skinner will always be welcome to the Coleraine Showgrounds," added Kearney.

For his part, Bradley thanked everyone at the Showgrounds club in a twitter post on Wednesday morning.

"Sometimes in football things happen that are out of your control," he said.

"I would just like to thank all the players board coaches and the fans at @ColeraineFC for my time there.

"I have made memories and friends that will last a lifetime. Thanks."

More on this story in Tuesday's Chronicle newspaper...