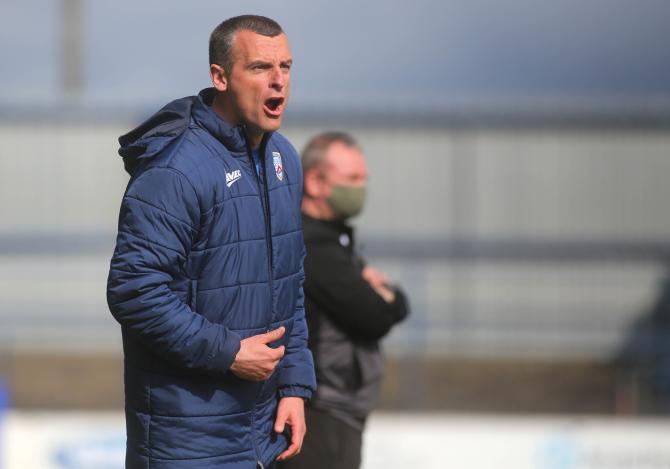 COLERAINE’S fringe players are missing their opportunity to stake a claim for the Bannsiders’ final vital games of the league campaign, Oran Kearney has said.

With some of Kearney’s key personnel missing through a mix of injury and suspension - plus Patrick Kelly being called up to the Northern Ireland Under-19 squad - the Coleraine manager feels that some of his players are not taking their chance to force their way into his thinking for the forthcoming European play-offs.

Coleraine secured their place in the top six last Tuesday night with an impressive 5-2 win over Warrenpoint Town, but on Saturday they 'weren’t good enough' as they lost 3-2 to a Glenavon side which had goalkeeper James Taylor sent off in the 76th minute following an altercation involving Kirk McLaughlin.

“We were knocking the door continually and our first half performance was really strong, we had a lot of opportunities,” Kearney said after the game.

“We had a big crowd here, but probably at the wrong time for us in terms of where we are at player-wise and everything else.

“It’s not ideal that we didn’t have the players that we wanted out there but the key thing is that it offers opportunities for other players to stake claims for places ahead of the playoffs and everything else that goes with it, but being honest there’s quite a few who haven’t.”

With five tough games coming up, Kearney - whose team remains sixth in the Danske Bank Premiership table - still hopes to finish as high up the rankings as possible.

“The key thing was getting top six and then mathematically we can still catch the team above us and that’s still what we want to try and do,” continued the local schoolteacher.

“The only way you can do that is by picking up points along the line and it’s disappointing that we haven’t been able to do that.”

Coleraine open their post-split fixtures on Friday, April 8 away to Larne, before hosting Crusaders on Saturday, April 16.

Title-chasing Cliftonville come to the Showgrounds on Easter Tuesday, while Glentoran come to Coleraine the following Saturday.

The Bannsiders round the season off with an away game to league leaders Linfield on Saturday, April 30.

For a full round-up of all the weekend’s football action pick up a copy of this week's paper...