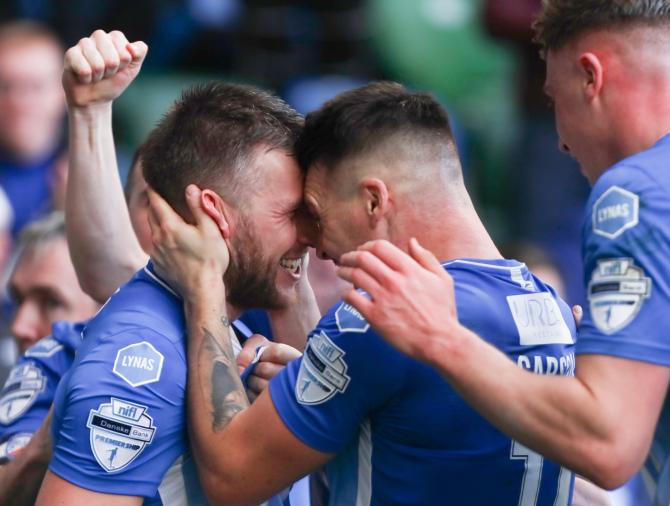 COLERAINE passed up a glorious chance to land the first piece of silverware of the Irish League season when they went 4-3 to Cliftonville in Sunday's Bet McLean League Cup final.

Oran Kearney's side led 2-0 with 20 minutes remaining but were pegged back in normal time and capitulated in extra-time.

A game which promised so much ended in massive disappointment for the players and their supporters who, again, backed them all the way.

In the end, it was Cliftonville's power off the bench which swung the game in their favour.

Strikers Joe Gormley and Paul O'Neill were introduced when all looked lost but, together, they terrorised what up to the point of their introduction appeared a dominant Coleraine defence.

For the remainder of normal time and into the extra half an hour they brought a new vibrancy to Cliftonville's attack.

They both scored twice to ensure that it was the Reds who lifted the trophy and brought to an end Coleraine's two year hold on the competition.

The result means that Paddy McLaughlin's side extended their stranglehold on Coleraine this season: in five meetings they have yet to lose.

It also means that Cliftonville have completed the first leg of what could yet be a famous treble: they are within striking distance of leaders Linfield in the race for the Gibson Cup and are in the last four of the Irish Cup.

For Coleraine, it was a day of utter frustration.

Matthew Shevlin with his 20th goal of the season and a Stephen Lowry volley had given them a comfortable 2-0 lead just after the hour and, at that stage, it seemed victory was within sight.

But the introductions of Gormley and O'Neill, together with the experienced Chris Curran, changed everything.

So, too, did the sending-off of Coleraine substitute James McLaughlin right at the start of extra-time.

The striker got involved in an incident on the touchline and referee Andrew Davey had no hestitation in brandishing the red card after consulting with his assistant.

It was a moment of indiscipline from the forward which harmed his side's chances. Assistant manager Winkie Murphy also saw red as momentum swung.

Cliftonville scored twice more in extra-time to pull away from their opponents and while sub' Curtis Allen pulled a goal back with virtually the last kick of the match to make it 4-3 the trophy was heading to Solitude at the start of what could be a famous few months for the north Belfast club.

For Coleraine, it's a question of 'what if?'

There were plenty of encouraging signs in the game, not least the peformance of 17-year-old midfielder Patrick Kelly, but worrying signs too.

Plenty to ponder, then, for manager Oran Kearney in the closing stages of the season.