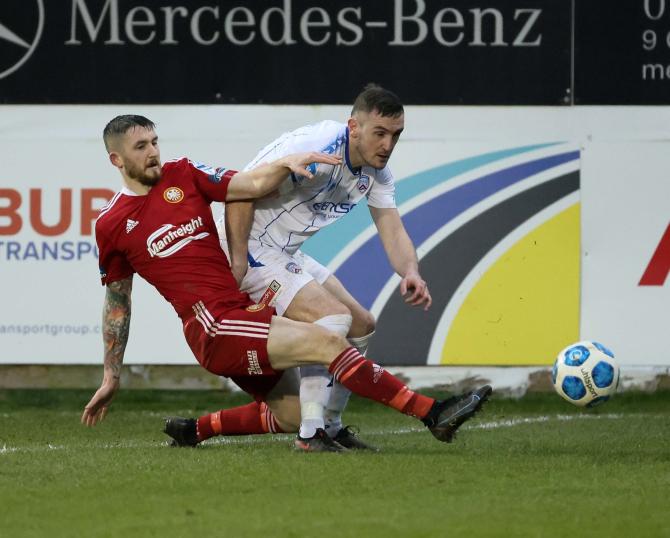 Coleraine were held to a scoreless draw in their last outing away at Portadown.

AT one time, not so long ago, Coleraine were looking up - just one team above them in the Danske Bank Premiership table.

Now, they are nervously looking over their shoulder as they look to consolidate their place in the top six.

Ballymena Utd and Glenavon are closing in on the Bannsiders whose form has dropped off a cliff in recent weeks.

They haven't won a league game since defeating Larne 3-1 on a wonderful night back in November, a run of seven games.

Yes, they have recorded cup victories in that time, but those were games that they would have been expected to win.

The pressure is mounting, then, to rediscover their early season form when they went 14 game unbeaten and scored goals for fun.

Unfortunately, the goals have dried up - blanks in five of the last seven league games - as was the case in their last outing against Portadown last week.

There was plenty of effort on show from the visitors at Shamrock Park but little finesse as Oran Kearney's men stuttered to a disappointing result.

Following that game, the Ballymoney schoolteacher warned that changes may be afoot this weekend in terms of personnel as he looks to rediscover his team's mojo.

Whether that means a complete revamp of the team or just a slight tinkering remains to be seen.

What is certain is that Coleraine need to return to winning ways soon, with games against the title chasing pair of Glentoran and Linfield coming up this week.

The Bannsiders have played Saturday's opponents Carrick on three previous occasions this season, all away, twice in the league and once in the Bet McLean League Cup.

They have won twice - 3-0 and 2-0 - but their last meeting ended in stalemate, 0-0, in the league at the start of November so Oran knows they can prove difficult opponents.

“Carrick have fought and fought and have had massive improvement under Stuart this year and have picked up some big performances on the road and at home as well," he said.

“It will be as tough as Portadown, if not tougher, so for us we have to get our house in order and it’s as simple as that.

“You could say that people were off the boil slightly at Shamrock Park but we have to get back to basics and try to get performances on the pitch again," he added.

His opposite number admitted he was looking forward to a first visit of the season to the Showgrounds.

"I've a lot of good mates there but I'm sick of looking at them," he laughed.

"I'm looking forward to it. I went and watched them recently on the new pitch.

"We will set up as best we can so we'll go and give it a good go.

"They've drawn with Portadown and I'm sure they will be looking for a reaction as that's probably not good enough for Oran's standards.

"We'll try and nullify their strengths and work on ours," added King.

Victory for Coleraine is vital if they want to retain their place in the upper half of the table, especially with big games coming up in the next eight days.

The weekend's action starts this evening (Friday) with two huge games - Larne at home to Cliftonville and Crusaders hosting Glentoran, the latter being streamed by the BBC.

The action continues on Saturday with the game at Coleraine plus Portadown's trip to Dungannon Swifts, Ballymena Utd at home to Warrenpoint Town and Glenavon's visit to Linfield.

* As ever, reports and reaction in Tuesday's print edition of The Chronicle.