Oran delighted to reach another final 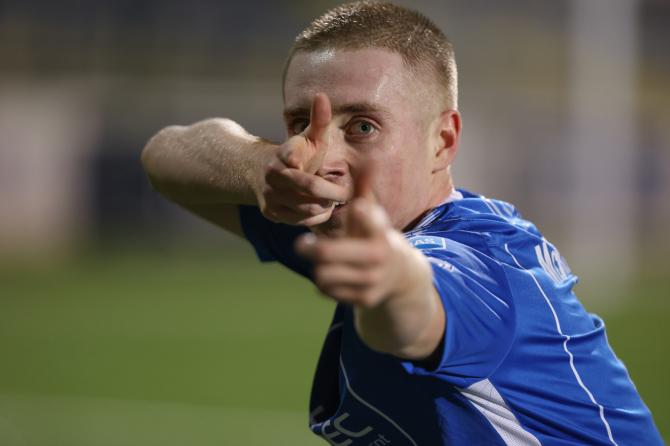 Conor McKendry added to his growing reputation with one of the goals in the win over Warrenpoint Town. Celebrations brilliantly captured by photographer Dessie Loughery.

CUP holders Coleraine aren't for giving up their Bet McLean League Cup trophy up easily if Tuesday night's annihilation of Warrenpoint Town is anything to go by.

The Bannsiders ran out easy 6-1 winners over the Danske Bank Premiership strugglers and will now face Cliftonville in next year's final after the Reds defeated Ballymena Utd 3-0 at Solitude.

But it was the manner of his team's win which particularly pleased Coleraine manager Oran Kearney.

“We are delighted with the result," the Ballymoney man told Coleraine FC TV afterwards.

“People will say - and you heard it before the game - that ‘it’s Warrenpoint and they’re bottom of the league and everything else,’ but I said to the players before kick-off that a cup semi-final is a cup semi-final.

“They are solely about winning and getting into a final and it was nice how we done it with a really good performance. To be honest, I didn’t expect the game to pan out that way.

“I know Warrenpoint in recent weeks have been really hard to beat and have played with a deep 5-4-1 formation and frustrated teams, with being dangerous on the break.

“We saw snippets of that in the first half in relation to the sporadic attacks that they had which caused us a few problems and scares.

“But, overall, to a man, I couldn’t have asked for any more as I thought the boys were outstanding," he added.

“It was hard to create opportunities as there were just a lot of bodies in the way, so I thought we managed the ball very well and we didn’t get impatient.

“We stayed patient, we waited for our opportunities and when the game opened up we were clinical."

As for opposing manager Barry Gray, he admitted his side were beaten by the better team on the night and maintained that Premiership survival for his club was more important that reaching a cup final.

At Solitude, a brace from Ryan Curran and one from Joe Gormley saw off the challenge of Ballymena Utd and ensured a first ever League Cup final meeting of the two clubs.

That final is expected to take place at the National Stadium at Windsor Park sometime in March.