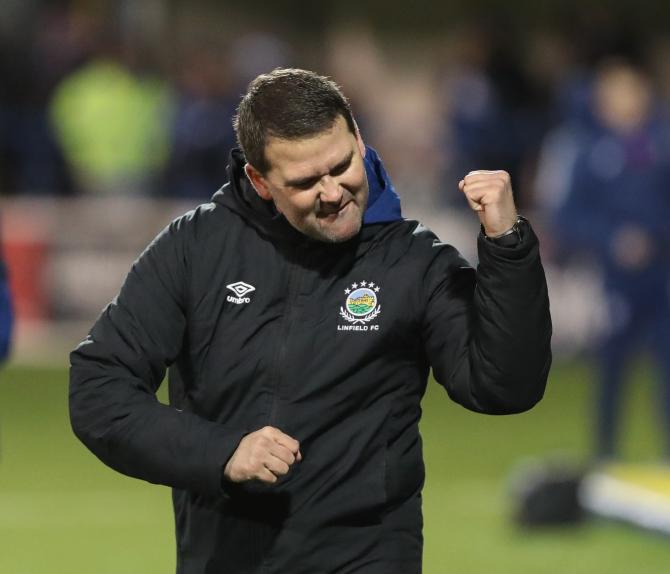 COLERAINE crashed to a first home defeat in over a calendar year on Saturday afternoon but that incredible record wasn't what was on most people's minds following a controversial 2-1 defeat to Linfield.

Instead, the main object of discussion following a rare Showgrounds defeat was the performance of the match officials and, in particular, match referee Tim Marshall.

The game was evenly poised at 1-1 early in the second half when Blues midfielder Stephen Fallon drilled home a long range shot to edge his side in front for the first time.

However, home players and management were incensed at the goal being allowed to stand, claiming that the ball had hit the referee in the lead-up to the goal.

In such a scenario, where the ball hits an official, a dropped ball is awarded.

On this occasion, and following a delay of almost two and a half minutes, the goal was allowed to stand, giving the Blues a vital advantage in what was a closely contested affair.

Understandably, the concession of the goal and the nature of it, unbalanced the hosts for a period but they gradually recovered their composure.

They created a number of decent chances in the final quarter of the game but some errant finishing and determined defending from Linfield saw them hold on for an important win.

Earlier, Rodney Brown had given the hosts the lead from a Jamie Glackin corner but Christy Manzinga levelled for David Healy's side before half-time.

The result has far-reaching consequences beyond simply losing a game of football.

It means Coleraine lose ground on rivals at the top of the Danske Bank Premiership as they slip to fifth in the table.

They are on 29 points, eight points behind leaders Cliftonville with a game in hand, and six behind Linfield having played the same number of games.

Glentoran are in third on 33 points with Larne on 32 points.