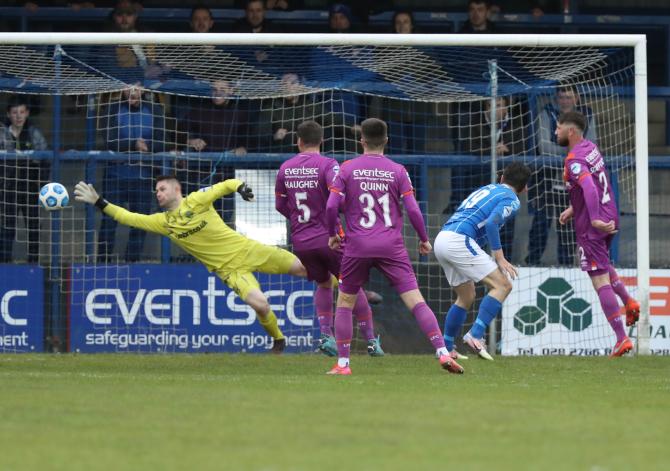 Curtis Allen scored the last time Linfield visited the Showgrounds back in May.

COLERAINE CAPTAIN Stephen O’Donnell believes the squad’s strong mentality is key to successfully competing against the league’s full-time clubs.
Much has been written about the disparity between the ‘haves and have nots’ in the Irish League’s top division but, to date, the Bannsiders have more than held their own.
Last Saturday’s scoreless draw with Cliftonville stretched their unbeaten league run to 13 games and keeps them firmly in the mix at the top end of the table.
However, their title credentials will be given a stern examination when they welcome defending league champions Linfield to the Showgrounds on Saturday.
“This is what we're in football for,” admitted the skipper.
“Linfield are coming here on Saturday, which is another massive game for us in front of what will be another huge crowd.

“Hopefully we can take maximum points,” he added.
Certainly, the Bannsiders’ home form would lend confidence to hopes of back to back positive results.
It’s over a calendar year now since Oran Kearney’s side last lost in front of their own fans and they present formidable opposition to anyone - full-time or not!
“All credit to the full time teams if you're able to do that,” continued O’Donnell.
“But for ourselves and the likes of Cliftonville we're going to our work and putting a shift in as well. That's the case for a lot of players throughout the league.
“We played Larne the other Friday night and our boys were finishing work at five, grabbing a sandwich on the way up the road, but we were still able to produce a performance.
“I think our group and our mentality gives us an extra five or ten per cent which allows us to level out with the full-time teams,” he added.
The home side go into the game in fourth place on 29 points, a single point behind this evening’s opponents who sit second with 30 points.