Coleraine left kicking their heels as Linfield up to second 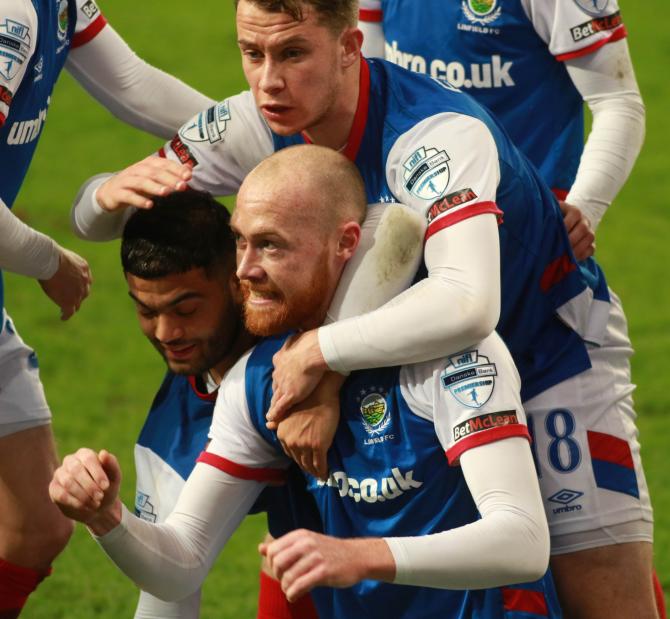 Chris Shields opening the scoring for Linfield against Carrick Rangers.

COLERAINE'S opponents this Saturday, Linfield, were the big winners following a midweek round of fixtures in the Danske Bank Premiership.

The Blues defeated Carrick Rangers 2-0 at the National Stadium to move up into second in the league table.

However, they didn't get things all their own way at Windsor Park against a determined visiting side, the winning goals coming late in the game.

The deadlock was eventually broken 10 minutes from time when referee Ross Dunlop adjudged that Kyle Cherry had handled inside the area and Chris Shields stepped up to confidently slot home the spot-kick.

The Blues doubled their lead in the final minute when Matthew Clarke's left-wing cross was met at the far post by Kirk Millar, who drilled home a clinical finish into the bottom corner of the net.

The victory means David Healy's men are two points behind league leaders Cliftonville on 32 points but have played a game less than the Reds, 15 as opposed to 16.

Paddy McLaughlin's side made it two away wins in four days following Saturday's scoreless draw at Coleraine when they drew 1-1 with Larne at Inver Park.

They made the breakthrough when Levi Ives curled home a brilliant free-kick from 25 yards midway through the half but Larne responded five minutes after the restart when Hale powered an effort into the bottom corner from the edge of the area after some excellent work by Fuad Sule.

Coleraine, of course, were inactive owing to the late postponement of their scheduled league game at home to Glentoran owing to Covid protocols.

No date has been announced for the rescheduled game but original tickets will be valid for this game.

Whether the enforced rest will have done Oran Kearney's men any good we will find out this weekend with the visit of Linfield.

The visitors are three points ahead of the Bannsiders with the same amount of games played so a win for either side would be a massive boost in terms of the title race.