Coleraine up to second in league after Larne win 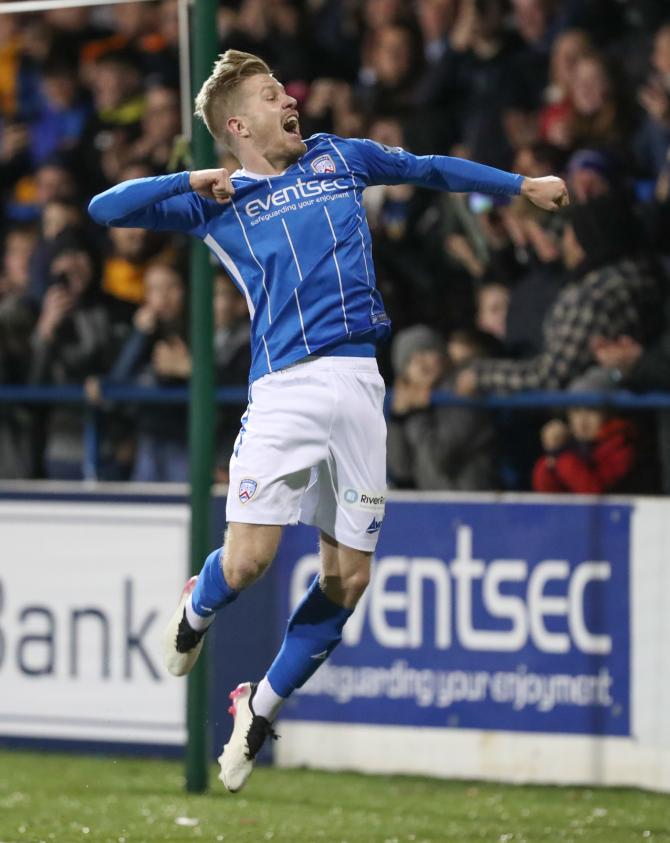 Lyndon Kane celebrates his goal from the spot which made it 3-1.

COLERAINE leapfrogged opponents Larne into second spot in the Danske Bank Premiership with a comfortable 3-1 win over Larne at the Showgrounds on Friday night.

The home side went in front midway through the first half when the impressive Jamie Glackin first controlled the ball and then volleyed it left footed past a helpless Rohan Ferguson in the visitors' goal.

They held the lead for just ten minutes as one-time Bannsider Ben Doherty stole through the home defence to deftly guide the ball past Gareth Deane after good work from Mark Randall.

But the hosts ensured they held the advantage at the break as Conor McKendry repeated Doherty's trick of scoring his former club.

The former Larne man let fly from distance, his shot taking a deflection of defender Cian Bolger before ending up in the net.

And the game was up for Larne when Coleraine made it 3-1 on the hour mark from the penalty spot.

Kofi Balmer was adjudged to have fouled Josh Carson in the penalty area by referee Shane Andrews and up stepped Lyndon Kane to fire the ball home off the base of a post.

From there until the end it was a case of seeing out the game as far as Coleraine were concerned, and trying to hit their opponents on the break.

They almost did, teenager Patrick Kelly testing Ferguson with a fine effort midway through the half.

A defence as miserly as Coleraine's was never to give up many chances and so it proved as Deane's goal remained largely untroubled.

So, a sixth win in seven home games to date ensures that Oran Kearney's side move into second behind league leaders Cliftonville.

The Reds travel to Linfield on Saturday while Crusaders and Glentoran meet at Seaview, two big games on a busy weekend.

A special word for 17-year-old Portstewart lad Patrick Kelly, who made his first start for the club in this game.

Some may have questioned the wisdom of throwing a teenager into such a big game but surely none did after following a supremely confident performance from the Loreto College schoolboy.

He simply grew into the game as it progressed, so much so that he looked completely at home by the time he went off late in the game to a standing ovation from home supporters.

A terrific full debut for a young player we are going to see and hear so much more about in the weeks and months to come.

And let's not forget a player at the opposite end of the age scale - Eoin Bradley.

At 37, he is 20 years Kelly's senior, and came on the final few minutes to make his 200th appearance for the club over two spells.

What a servant he has been.

All in all, a great night.