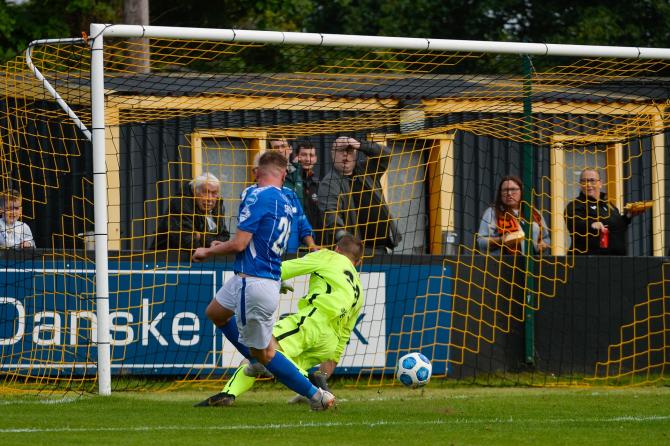 Matthew Shevlin was on target the last time the sides met in the league at the Belfast Loughshore Arena.

COLERAINE will look to stretch their unbeaten league run to ten games when they visit Carrick Rangers this weekend.

The Bannsiders are unbeaten since the defeat to league leaders Cliftonville at Solitude back in August and have won their last two games.

In contrast, Saturday's opponents' form has dipped following a bright start to the season under new manager Stuart King.

They have lost their last three league games and have slipped to seventh in the Danske Bank Premiership.

However, experienced Coleraine manager Oran Kearney is taking nothing for granted ahead of the trip to the Belfast Loughshore Arena.

"We've been there twice already this season and got it really tough," he said.

"I watched their game last Friday night against Glentoran and thought they were unfortunate.

"There were two brilliant bits of quality for the two goals for Glentoran and after that it became a bit tougher for them.

"But up until the first and second goals I thought they more than matched Glentoran.

"It's a hard place to go. It's a tight pitch and everybody knows what Carrick can be like.

"We'll be expecting a tough game and will have to be at our best to take anything from the game," he added.

That was the case back at the start of September when Coleraine produced a professional performance to win 3-0.

Conor McKendry opened the scoring after 12 minutes in that game before Jim Ervin was sent off on the half hour following a foul on Matthew Shevlin.

And his former Ballymena Utd team-mate made the most of his new found freedom in the second half, scoring twice to cement a good away win.

Shevlin has continued his fine goalscoring form ever since and has eight league goals to his credit, just one behind leading marksman, Glentoran's Jay Donnelly.

Indeed, Coleraine are the leading scorers in the top flight, with 23 goals, two better than rivals Linfield and Larne.

At the other end they are proving equally adept, having conceded just nine goals in 11 games and goalkeeper Gareth Deane keeping an impressive seven clean sheets.

Saturday's game heralds the start of a busy week for Coleraine.

On Tuesday they host Glentoran in the quarter-finals of the Bet McLean League Cup and four days later welcome Dungannon Swifts in the league.