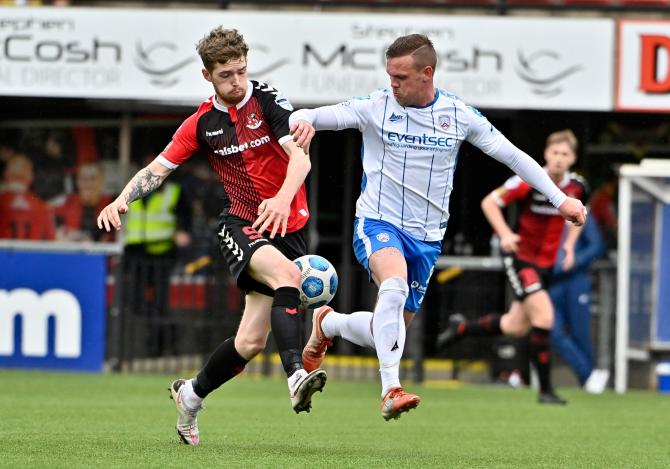 Jamie McGonigle is believed to be heading for the exit door at Seaview.

FORMER Coleraine striker Jamie McGonigle looks to be heading for the exit door at Crusaders, according to a report in Friday's Belfast Telegraph.

Reporter Graham Luney claims that the Seaview club's valuation of the player has been met.

The article states that Larne and Glentoran have been linked with the Dungiven man, though there is speculation linking him with a return to the Coleraine Showgrounds.

The 25-year-old came through the ranks at Ballycastle Road before signing a three year deal with the north Belfast club two years ago.

Speaking to the Belfast Telegraph, Crues' manager Stephen Baxter admitted that there 'has been interest around Jamie.'

“This is football. It’s part and parcel of the game. Jamie has expressed a little interest in exploring an opportunity and we have no issues around it, he’s a great lad. There’s been no fall-outs.”

The news comes a day after former Ballymena Utd and Larne forward Jonathan McMurray signed a three year contract at Seaview after his contract at Inver Park expired.

Boat owners must join a waiting list for a berth at Portrush Harbour.

Two paddle boarders swept off shore in highwinds on Sunday have been rescued by a Coastguard helicopter.