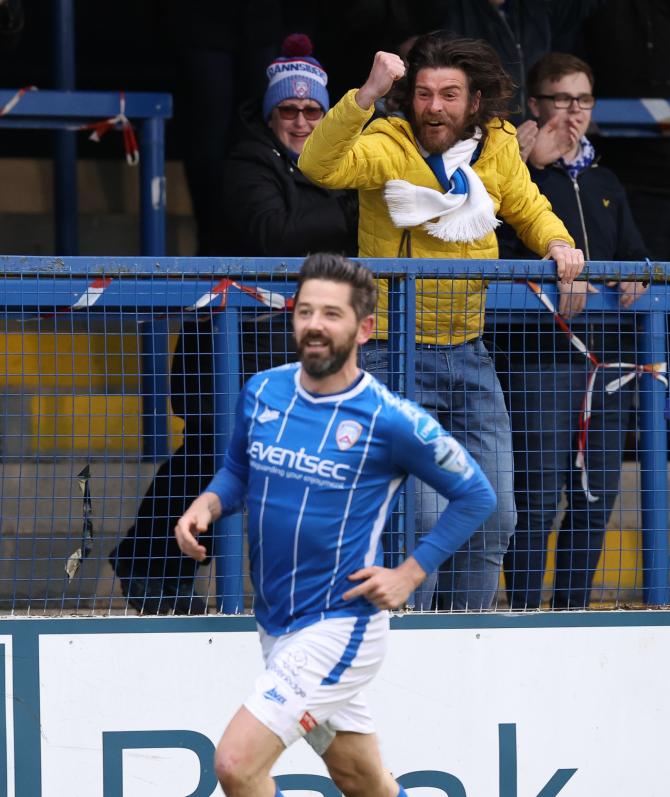 Curtis Allen was on target for the Bannsiders in Tuesday's 1-1 draw with Linfield.

IN the end it just wasn't to be.

Despite Coleraine's best efforts, they couldn't find that elusive second goal in Tuesday's 1-1 draw with Linfield at the Showgrounds.

The result means that David Healy's side complete another league and cup double, claiming the Gibson Cup just days after defeating Larne in the Irish Cup final.

But while Friday was a stroll in the park, the Blues were given a stern examination here by a home side cheered on by 500 vociferous supporters, making a welcome return to the old ground for the first time this year.

They had star performers in defence, particularly Mark Stafford, and goalkeeper Chris Johns who joined Linfield from Coleraine last summer.

Countless times they did whatever it took to keep the ball out of the net at the Railway End; on other occasions, the ball just wouldn't fall to a Coleraine player.

They created few chances at the other end where Coleraine's defenders were equally resolute, none moreso than Aaron Canning.

Behind him, Marty Gallagher again proved his worth as deputy to former Linfield keeper Gareth Deane, out injured, one double save in particular before half-time an outstanding effort to keep his side in the game.

He was powerless to prevent Linfield taking an early lead, Mark Haughey heading home a corner at the back post after the home defence had gone AWOL momentarily.

It was just the start Oran Kearney's men didn't want but, to their credit, they responded positively as they so often done this season when faced with a setback.

Curtis Allen had a goal chalked off for handball but made amends soon after with a legitimate goal, timing his run to perfection to meet Lyndon Kane's inviting cross and beating Johns from close range.

There were other opportunities, too, but half-time interrupted Coleriane's flow and it took them a while to get going again after the break.

They did, though, test Chris Johns on a number of occasions. James McLaughlin's header was palmed away while Josh Carson's low shot was also saved, no Coleraine player on hand for the rebound.

Oran Kearney introduced Eoin Bradley and Ian Parkhill in a bid to shake things up but Linfield are champions for a reason.

They withstood everything their hosts threw at them, even in the four added minutes, and were mightily relieved  to hear referee Raymond Crangle's final whistle.

With no away supporters in the ground it was left to Linfield backroom staff and management to celebrate with the players a record 55th league title.

Coleraine players, meanwhile, took the applause of their proud supporters who knew they could have done no more on the night.

There's little time to feel sorry for themselves, however, with a trip to Larne on Saturday to complete what has been at times a tough campaign.

European qualification already secured, it's now about finishing second for the Bannsiders.