All to play for with just two games left 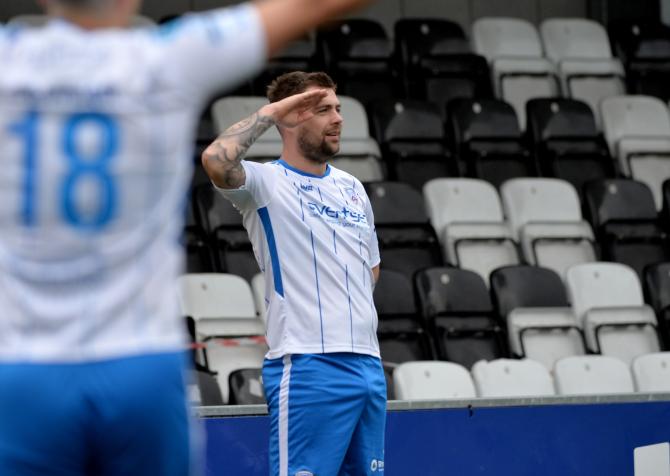 The most incredible season anyone can remember just took another massive twist on Saturday.

Victory for Coleraine at Seaview in the lunchtime kick-off saw them put the pressure on leaders Linfield and pursuers Glentoran later in the afternoon.

In the end, both buckled - the Blues losing 2-1 at home to Larne and the Glens going down 2-0 to Cliftonville at the Oval.

The end result? Oran Kearney's men close the gap on David Healy's side to five points and open a four point gap on the east Belfast club.

With just two games remaining, the destination of the Gibson Cup - for so long seemingly Windsor Park bound - is suddenly thrown up in the air.

Not least because Coleraine host Linfield in the next round of league games on Tuesday May 25.

Do we dare to dream of a Coleraine win that night, meaning that the title race goes right to the wire?

Why not? This Coleraine team has shown on countless occasions that it has what it takes to win games of football.

They proved it again at Seaview on Saturday against a Crusaders side showing nine changes to that which defeated Glentoran in the Irish Cup just a few days previously.

Despite the wholesale changes, any Stephen Baxter side will provide stern opposition and so it proved as they made their visitors work hard for the three points.

Both teams created good openings in the first 45 minutes but a combination of errant finishing and good goalkeeping meant that the sides went into scoreless at the break.

The decisive moment of the game occured not so much on the field of play as in the dug-out as Oran Kearney gambled with a double substitution early in the second period.

He changed the dynamics of his attack, replacing Matthew Shevlin and Eoin Bradley with Curtis Allen and James McLaughlin, and the move worked a treat.

Allen, a noted goalscorer throughout his career, on this occasion turned provider as he crossed for McLaughlin to outfox the home defence and head past Johnny Tuffey from close range.

His opposite number, Marty Gallagher, however, could not be beaten.

Understudy to regular custodian Gareth Deane for much of the season, the former Institute stopper has more than proved his worth in recent weeks.

And he was at it again here as he produced a string of fine saves to deny the Crues and, in particular, David Cushley.

Not least a fingertip save to deny Cushley from a free-kick in the closing minutes as Coleraine held on for an important win.

His will to win was perhaps best exemplified when clearing his lines he went through the back of his captain, Stephen O'Donnell.

Such was the force of the contact that the big skipper, not a man noted for leaving the field of battle easily, was unable to continue, being replaced by Adam Mullan, making his first appearance of the season.

Speculation is that O'Donnell suffered broken ribs as a result of the challenge but any pain felt by the Derryman will be eased by the knowledge that his team remains firmly in the title hunt on a remarkable day in a remarkable season.