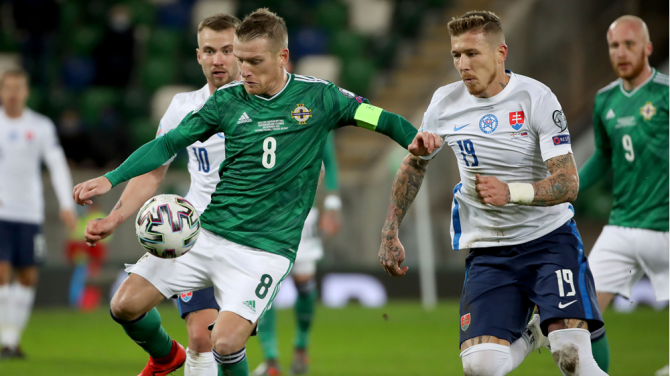 Northern Ireland captain Steven Davis is in line to win record-breaking 126th cap for his country this evening.

NORTHERN Ireland manager Ian Baraclough has promised his team will be fully focused on securing all three points against Bulgaria in Belfast tonight (19.45 kick-off).

Baraclough says the FIFA World Cup Qatar 2022 qualifier is a crunch game for his side as they look to get their European Qualifying Group C campaign 'up and running.'

He is expected to put out a starting eleven along similar lines to the one that lost 2-0 to Italy in Parma in Northern Ireland’s opening Group C fixture.

However, he has admitted the strong performances of some individuals in the 2-1 defeat in Sunday’s home friendly against USA has provided him with a few selection headaches.

In the match programme for the game, he said: “I really do not like losing football matches. I want to win games and tonight is a must-win for us.

“Although we lost to top seeds Italy in our opening Group C qualifier last Thursday, I have seen enough in that 2-0 defeat and the 2-1 loss to United States of America on Sunday to convince me that we have got what it takes to do well in this qualification campaign.”

Baraclough also pointed out: “Bulgaria have suffered two defeats over the past week in their opening Group C fixtures - against Switzerland and Italy - and I have no doubt they will be itching to get points on the board.

“However, we are determined to get our campaign up and running by securing all three points. We have to win our home games if we are to stand any chance of making headway in the group. And I am confident that we can get the desired result tonight.”

In Bulgaria’s home Group C defeats to Switzerland (3-1 defeat on Thursday) and Italy (2-0 reverse on Sunday) their new head coach Yasen Petrov operated with a back three. A 3-4-2-1/3-5-2 system was deployed within those matches.

Spezia striker Andrey Galabinov partnered Spas Delev up front for the Italy clash. Adept at holding the ball up and standing 6ft 4in tall, Galabinov is expected to be the focal point of the Bulgarian attack if selected once again this evening.

Bulgaria had just 30% and 32% possession in the matches with Switzerland and Italy respectively and are likely to be comfortable sitting deep and looking to hit their opponents on the counter-attack once again tonight.

Petrov has said he wants his side to play without fear, irrespective of their opponent.

Baraclough, in a press conference yesterday, said he expects the Bulgarians to counter-attack at every given opportunity, and he is also wary of their set plays.

He also noted the Bulgarians have a compact defence that is strong and resolute and he believes his players will be embroiled in a physical battle throughout the 90 minutes.

The Northern Ireland manager further revealed there’s a clean bill of health in his squad ahead of the Group C match.