Ballymena shock Glens at the Oval

Linfield the big winners on a night when Coleraine were inactive 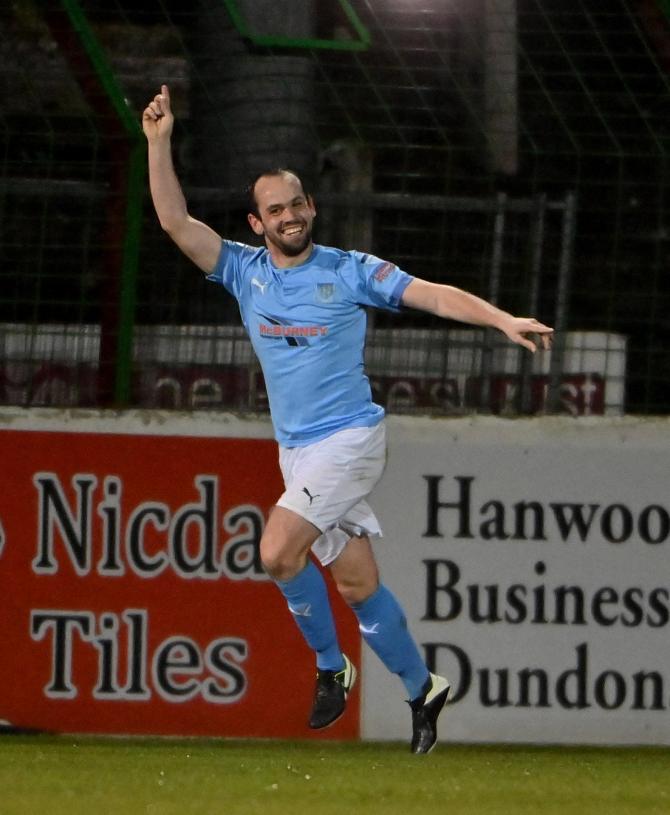 Tony Kane, on target for Ballymena Utd in Tuesday's win over Glentoran.

BALLYMENA Utd caused something of an upset on Tuesday night when they beat in-form Glentoran 2-0 at the Oval.

Goals from Tony Kane and Ross Redman inflicted defeat on a Glens' team which had won its previous six games.

The result brings to a halt the east Belfast club's recent surge up the table.

They are now in fifth place in the Danske Bank Premiership table with 36 points from 21 games played.

Big winners on the night, in more ways than one, were their 'Big Two' rivals Linfield.

They defeated Warrenpoint Town 5-0 at Windsor Park to move on to 48 points from 23 games.

The Blues are now five points clear of nearest challengers, Coleraine, on 43 points. Oran Kearney's men do, however, have a game in hand.

The Bannsiders were inactive on Tuesday night, their first midweek break in over a month.

They are back in action this Friday night when they entertain Crusaders who did play on Tuesday.

A goal from former Bannsider Jamie McGonigle helped them to a 3-1 defeat at Carrick Rangers.

Stephen Baxter's side are currently in third place, four points behind Coleraine on 39 points and having played a game more.

In the one remaining game, Glenavon exacted a measure of revenge for Saturday's drubbing at the hands of the same team by beating Portadown 2-1 at Shamrock Park.

The action continues apace this weekend and kicks off with that big meeting of Coleraine and Crusaders at Ballycastle Road.

A win for the home side - and the two previous meetings this season have gone the way of the hosts - would see the Bannsiders open a seven point gap on the visitors, with a game in hand.

On Saturday, leaders Linfield will expect to pick up maximum points at home to Carrick Rangers while Glentoran will look to get back to winning ways at Warrenpoint Town.

However, Milltown is never an easy place to go and get a result and Town manager Barry Gray will be looking a response from his players to Tuesday's 5-0 drubbing at the National Stadium.

Third-placed Larne, who had no game on Tuesday, are on their travels to Dungannon Swifts who will have new manager Dean Shiels in the dug-out for the first time.

The Swifts pushed Coleraine all the way in a 3-2 defeat last weekend and are no pushovers at Stangmore Park.

Cliftonville, who have dropped to sixth, meet eigth placed Glenavon at Solitude with Ballymena Utd entertaining Portadown in the remaining game.