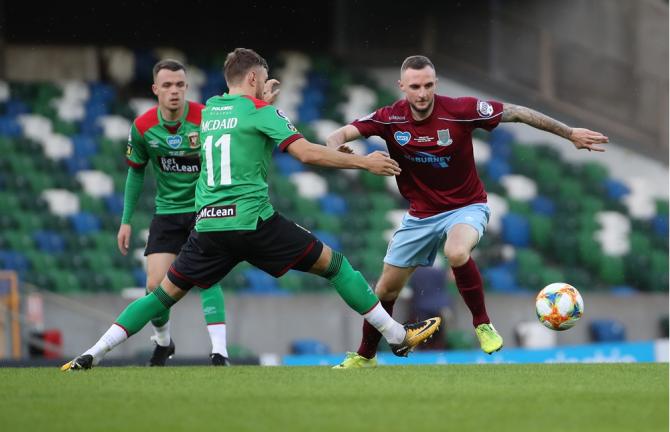 THE draw for the opening round of this season’s Sadler’s Peaky Blinder Irish Cup will be staged later this week.

It is due to be streamed live on the BBC Sport NI website at 5.30pm on Thursday (17 December) from the National Football Stadium at Windsor Park.

Last month the Irish Football Association’s Irish FA Challenge Cup Committee said it had assessed the 'ongoing impact of the Covid-19 pandemic on the early rounds of the Irish Challenge Cup' and unanimously decided to reduce the number of participants in the 2020-21 competition to 32 clubs.

The opening round - known as the Round of 32 - will get under way on Saturday 9 January 2021 and involve the 24 senior clubs of the NIFL Premiership and Championship along with eight intermediate clubs.

Four of those intermediate clubs are the semi-finalists of the McComb’s Coach Travel Intermediate Cup from season 2019-20 – Dollingstown, Newington, St James’ Swifts and Belfast Celtic.

The remaining four places have gone to the four intermediate teams ranked highest in last season’s league pyramid based on points per game. They are PSNI, Portstewart, Bangor and Banbridge Town.

The Sadler’s Peaky Blinder Irish Cup attracted 130 teams in 2019-20, made up of senior clubs and intermediate clubs.

The committee said the decision to scale back the Irish Cup this season was 'in the best interests of the competition and with the current social and health situation in mind.'

It also said it hoped to return to the traditional cup format in the 2021-22 season. The traditional format sees intermediate sides compete in four rounds before being joined by the 24 senior clubs in the last 32 (fifth round).