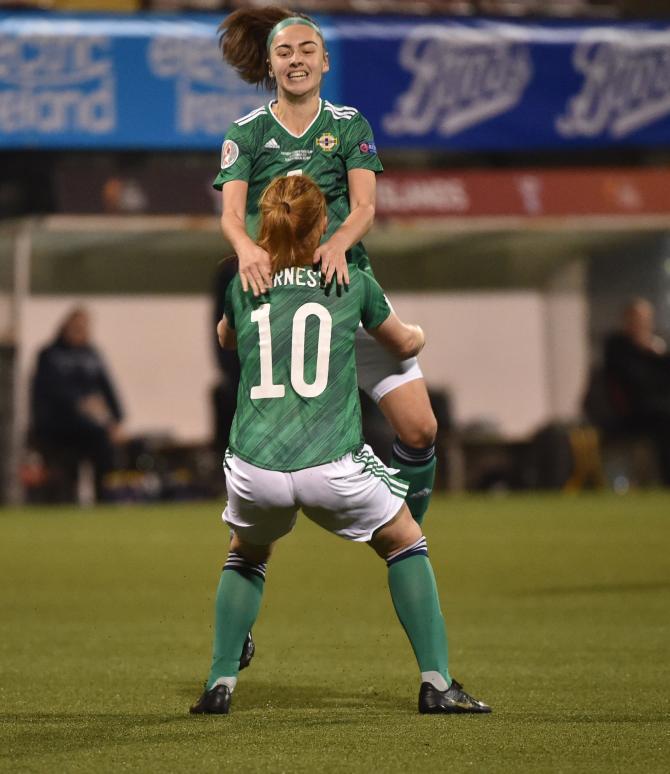 WRITTEN off many times, it would be a brave - or foolish - person to dismiss NI Women’s chances of competing at a first European Championship finals.

Defeated heavily on a number of occasions in the early stages of their qualifying group, the girls’ belief never wavered.

And they got the reward their efforts deserved last week when back to back wins over Belarus and the Faroe Islands earned them a play-off place for Euros 2020.

It’s unchartered territory for the NI Women’s team but write them off at your peril.

“No matter who we’re drawn against we’ll be going in as underdogs,” admits Chloe McCarron.

Still only 22, the Coleraine girl produced a mature performance in midfield in the decisive win over the Faroes, scoring the all-important third goal in the process.

“I’m not sure at this stage whether the play-off is one game or two but it won’t be long until April,” she continues.

“There are some big names in the draw and it would really put us on the map if we managed to qualify.

“It would also be brilliant for the younger players coming through to see what can be achieved.”

The next generation could do worse than to study McCarron’s own career, which began with East End in her hometown back in the day.

From there, she quickly graduated through the ranks of a number of local leagues before joining Linfield Ladies.

A successful spell at the National Stadium drew admiring glances from clubs across the water and it was no surprise when she made the transition earlier this year.

In August, she became the first player from the Danske Bank NIFL Premiership to earn a full-time professional contract when she signed a two year deal with FA Women’s Super League club Birmingham City Women.

The midlands club is currently mid-table having suffered a 3-0 defeat at the hands of Arsenal at the weekend but the experiences are proving invaluable to Chloe and, by extension, Northern Ireland.

“Coming from a small town like Coleraine to suddenly be living in a city where it’s constantly all go is quite a change while football wise it’s up another level too.

“We’re lucky to be able to share the same facilities as the men’s team and I think that has helped the team perform well so far.

“It has also helped me at international level.”

A senior international since the age of 16, Chloe is well placed to speak of the increased profile of the women’s game and the change in the team’s fortunes.

“It’s unblievable the coverage we’re getting now,” she says.

“I suppose that goes with being successful but it was great to see so many media covering our final two games.

“That has a lot to do with the manager, Kenny Shiels. He has come in like a breath of fresh air and basically changed our style of play.

“He has given us licence to play out from the back and given us encouragment to keep trying, even when it hasn’t maybe worked.

“All the girls have bought into it and it seems to be working.”

The only thing missing was family and friends, unable to share in the celebrations because of Covid-19 restrictions.

But the hope is that the climate may have changed sufficiently by the spring to allow supporters to help cheer the group to Euro qualification.

For now, Chloe plays her last game for Birmingham on December 20 before flying home to celebrate her birthday with her family two days later and, of course, Christmas.

After that, it’s a New Year full of promise for her and her team-mates.

We wish them well.