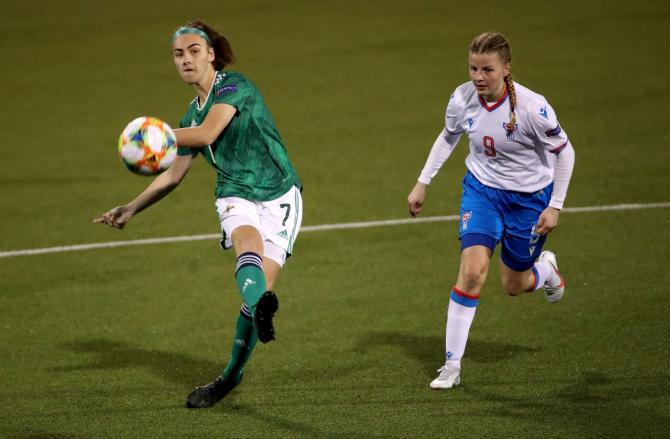 Coleraine's Chloe McCarron was on target as NI Women earned a play-off place with victory over the Faroe Islands.

NORTHERN Ireland Women got the result their efforts over the past few months deserved when victory the Faroe Islands on Tuesday night saw them book a place in next year's play-offs for Euro 2022.

Kenny Shiels' side recovered from going a goal down early on to dominate their opponents on their way to a convincing 5-1 win at Seaview.

Among the goalscorers was Coleraine's Chloe McCarron.

A product of the East End youth system, the 22-year-old graduated to playing with Linfield before making the move to full-time football in England with Birmingham City earlier this year.

Alongside her in the starting line-up at the home of Crusaders FC was fellow Coleraine woman, Lauren Wade, who plays her club football in Scotland with Glasgow City.

Together, the group created their own little piece of history and now stand on the verge of qualifying for a first ever championships.

For more reaction and photos, see next Tuesday's paper.