Former NI international backing Ian Barraclough's men to get the job done against Slovakia despite there being just over 1,000 fans at National Stadium 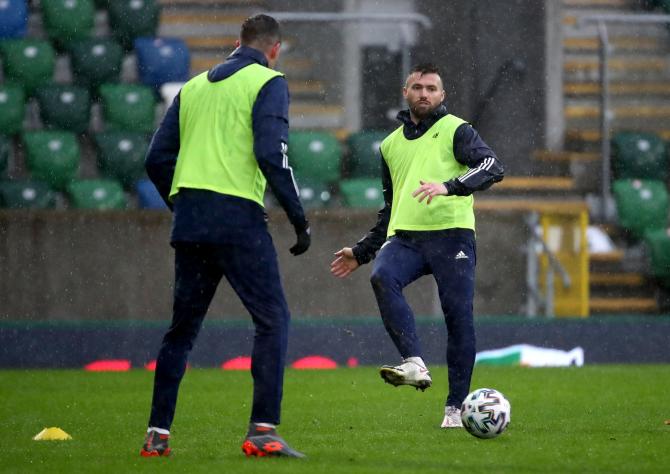 Stuart Dallas will be one of the key men for Northern Ireland.

FORMER Northern Ireland international Ivan Sproule senses another momentous occasion for the ‘Green and White Army’ when they host Slovakia this evening (Thursday) in their European Championship play-off.

Ian Baraclough’s side are just one victory away from sealing their place in next summer’s Euros after defeating Bosnia in a dramatic penalty shoot-out.

Qualification would ensure Northern Ireland a second consecutive appearance at the European Championship finals following their famous journey in France four years ago.

Michael O’Neill’s men made it through to the last 16 of the 2016 competition only to suffer an agonising 1-0 defeat to Wales.

Northern Ireland had qualified for the competition after a remarkable 2-0 victory over Greece at a packed Windsor Park.

And although there will only be a thousand supporters in attendance tomorrow night due to coronavirus restrictions, Sproule - who played 11 times for his country - believes Northern Ireland can produce another special night in Belfast.

“You look at recent performances and I think it has been a wee bit up and down, but it all comes down to what happens on the night,” said Sproule, currently managing Championship club Dergview.

“For me, it’s about turning up on the day.

“We have the experience of Steve Davis and hopefully our key players like Johnny Evans are fit. Stuart Dallas is making great waves in the Premier League.

“We have strong players playing well at club level, even in the Championship, so it’s about carrying their club form on to the international stage.

“Some of the players have already tasted the Euros before and they will want to taste more of international competition.

“They will pass on the information to those players who haven’t done it.

“It’s always a real privilege and honour to put on the national team’s jersey and I was lucky enough to play for a number of seasons alongside the likes of Steve Davis.

“There won’t be a player in the changing room who won’t know the importance of even playing in a friendly.

“If the players perform to their maximum and they get it right tactically on the night then I’m sure they can get over the line.”

Over 1,050 supporters will be in attendance on the night and Sproule believes they can play their part.

“The players deserve a lot of credit for their football over the years, but a packed Windsor Park certainly plays its part,” he said.

“When you get a full house there and it’s rocking, you get a real buzz. It’s just a shame there can’t be a packed house for us because the 12th man more than played their part.

“I was very lucky and privileged to play the number of times I did.”

“It doesn’t matter where we played in the world, the fans followed, and they made terrific noise.

“I’ve played in games with up to 60,000 fans or whatever, but there was always much more noise at Windsor. Other players who also played in big games across England and Scotland say that as well.

“As well as being the best fans, they’re also the loudest.”

There is no doubt that Baraclough has big shoes to fill after O’Neill left to take up the manager’s role at Championship side Stoke, but he has already passed one test in defeating a Bosnia side featuring the likes of Edin Dzeko and Miralem Pjanic.

And Sproule has faith in the new manager to continue the success, despite receiving a 5-1 thrashing at the hands of Norway in the Nations League in Baraclough’s first home game in charge.

“Baraclough will have the side well set up against Slovakia and a plan for the night,” said Sproule.

“But it is going to be a challenge.

“I watched the 5-1 defeat to Norway, and it was cruel. But that’s what can happen in international football.

“I’m not saying we have been spoilt, but we haven’t had many whackings like that over the last while. We have held our own in the majority of games. But when you’re not quite at it in international football you can be on the wrong end of a drubbing.

“I’m sure they were hurting. What I found with international football is that if you didn’t play well you beat yourself up until you got the chance to put the shirt back on and rectify it. I think the Northern Ireland team did that extremely well with their good performance against Bosnia.”

Sproule continued: “I am confident they can get something out of the game. Baraclough is only into the job, and he will have his own ideas. I wouldn’t judge him after the Norway game, because it’s a process.

“When we changed managers, it was time to rebuild and I think that because Baraclough was in the under 21s, he will have the experience of seeing the younger ones coming through.

“In the future, he will have to blood new players in. Yes, it would be great to qualify for this campaign now, but there also has to be a bigger picture about where we’re going to be in two, three or four years.

“They haven’t just gone for the biggest name, what they have done is what other clubs have done by looking at someone who fits their style of play and structure.

“Northern Ireland have put a lot of work into their youth teams and the infrastructure. There is something building there, and the IFA have tried to put money into that.

“We knew it was always going to end at some stage with the previous manager, and for me, personally, it was the right decision to bring Ian in and give him the chance.”

Sproule admits it is the kind of match he would have loved to have been involved with during his playing career, but looking back on his international career the 39-year-old has no regrets.

“I have fond memories of my international days,” said Sproule.

“My first game was in the 1-0 victory over England and that’s where I started off from. I think that was the start of an era. There was a real buzz about the place under Lawrie Sanchez, we had the nights against Spain and Sweden, those David Healy exploits.

“It’s a great credit to the players and the coaching staff who went on to achieve success and took us to the Euros.”