Owens goal the difference as Crues edge out Coleraine 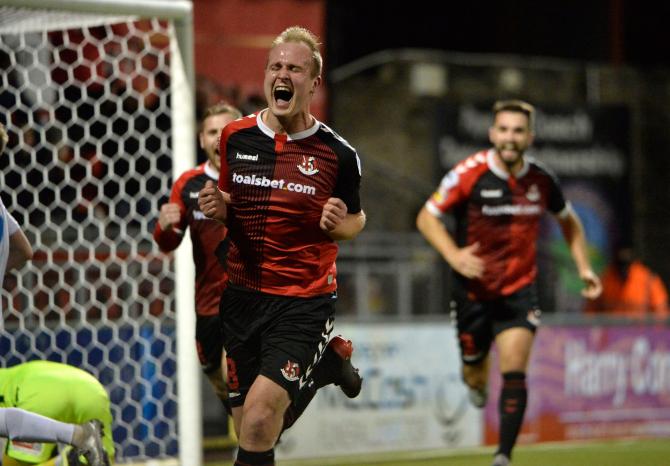 Goalscorer Jordan Owens celebrates after scoring what proved to be the sinner against Coleraine on Tuesday night.

WHAT are Crusaders gonna do when Jordan Owens retires?

I ask because so often he is the man who pulls them through when needed.

He was at it again on Tuesday night when he escaped the attentions of marker Stephen O'Donnell for about the only time to score the only goal of a well contested game between two committed teams.

It was tough on the visiting team who had played their part in an engrossing if not spectacular game played out in front of the Sky cameras.

Particularly so as they went into the game down to the bare bones in terms of personnel, veteran defender Steven Douglas pressed into action at the heart of the defence at the grand old age of 43.

He went on to perform admirably in a unit which restricted an attack of Owens, Lecky and McGonigle to very little over the course of an hour and a half.

On McGonigle: the former Coleraine striker is not a winger. Played out on the left and up against former team-mate Lyndon Kane, the Dungiven man was a peripheral figure for much of the match, well marshalled by the Coleraine right-back.

Bradley, suspended for six games and making his first league start of the season, was partnered with Curtis Allen up front as Coleraine lined out in a 4-4-2 formation.

And his influence was evident early on as he crept in behind Crusaders left-back Michael Ruddy to pull the ball back for Ben Doherty. The midfielder turned smartly inside the area but got his shot off with his weaker right foot only to see the effort blocked by a defender.

Minutes later and Philip Lowry forced a tremendous reaction save from Coleraine keeper Gareth Deane after his header from a Ross Clarke corner appeared to be going in at the near post.

Coleraine created another good opening towards the end of the half when Stephen O'Donnell fired towards goal after Eoin Bradley had created the opening but once again a covering defender blocked the shot.

The Kilrea man came close to breaking the deadlock with a trademark free-kick which Sean O'Neill did well to push away from goal as the game remained in the melting pot.

Then, just as it seemed the game was destined to remain scoreless, the hosts scored through a familiar route - an Owens header from a Forsythe free-kick.

It was a real body blow to Oran Kearney's men who must have felt their efforts deserved more than they got.

Ben Doherty fired a shot over the crossbar in the dying moments as the visitors' challenge petered out.

The result sees Crusaders join Linfield at the top of the Danske Bank Premiership table on 12 points, having played a game more than their Belfast rivals.

Coleraine, with one point from their last two games, have fallen off the pace slightly and in fifth place in the fledgling league table with seven points from five games.

They face another stern test on Saturday when they welcome David Healy's side to the Showgrounds.

The Blues have won their opening four league games and will have been helped by the fact that they had no game on Tuesday night.

Oran Kearney must hope that some of his injured players return sooner rather than later as his resources are severely depleted at the moment.

Evan Tweed is the latest casualty: the midfielder, so impressive in the team's first four league games, picked up a strain against Glenavon and sat out the trip to Seaview.

Central defenders Howard Beverland and Adam Mullan are both injured, Aaron Canning remains on the transfer list and Gareth McConaghie has two matches remaining on his suspension following his red card against the Lurgan Blues. Left-back Aaron Traynor is also injured.

He'll never make a song and dance about the fact that he is missing so many important players, but there is no doubt that their unavailability is critical to the team's early results.

Get the missing players back and, suddenly, things look a lot more promising.

It's a marathon not a sprint after all.