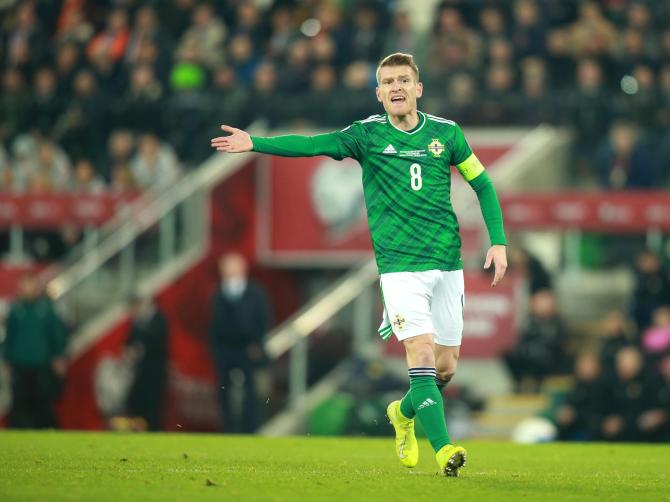 THE Chronicle's sister paper, the Ballymena Guardian, caught up this week with record-breaking Northern Ireland captain Steven Davis, in between leading his team to a memorable penalty shoot-out win over Bosnia and Herzegovina in the UEFA Euro Qualifiers and the Nations League game against Austria.

And, as we congratulated Steven on winning his 120th cap for his country, beating the legendary Pat Jennings' record in the process, we tried to find out how this sensational run of caps came about - from boyhood to the present day.

GUARDIAN SPORT: Think back, Steven, to your earliest football memory...

STEVEN DAVIS: I can always just remember having a ball at my feet, playing with my brother Richard, who is three years older than me, and his friends. My father didn’t play any football so it was all just good fun in my early days.

GS: You attended Buick Memorial Primary School in Cullybackey where you came under the eye of teacher/football coach Mr Tommy Speers who probably saw your talent in the front playground of the school.

SD: When I was at Buick Memorial, I think I played a few years for the school team, winning fairly regularly. I remember winning the Ballymena District league with Buick in 1995 after completing the league unbeaten. We had a great wee team; all of us used to love playing for the school as we had success and it got you out of class. Mr Speers was the coach and we had players like Derek Reid, the Nicholl brothers, David Ferguson etc. I have great memories and friends from primary school.

Q: After leaving Buick Memorial, you made the long walk up the drive on the Galgorm Road to Ballymena Academy where the ball was a slightly different shape at a predominantly rugby playing school. Were you ever asked to kick one between the posts and over the bar...?

SD: It was different going to the Academy, where it was compulsory to play rugby. I used to turn out as a scrum-half and, although I enjoyed it, it wasn’t for me. It  was frustrating that we didn’t have a school football team until fourth year which was a shame. I know the Academy has a successful history with rugby, but I would like to see football at the school taken seriously as well so that everyone gets a chance.

GS: Back to your football career, Steven. You shone at Buick where you and your best mate, Derek Reid, also played for the Ballymena District team. Not only did the two of you play for the District but you were asked to attend a primary school residential; is this where St Andrews Boys Club first spotted you?

SD: Yes, I went to a residential in Coleraine where Joe Kincaid was there who founded St Andrews BC and he invited me up to train. From there I never looked back. It was a great set-up with some quality players and we enjoyed a lot of success.

GS: Through your early youth, playing development, had you many trials?

SD: Yes, I went to Rangers, Arsenal and Aston Villa and, like all young lads, everyone dreams of making a career out of playing football. So it came reality when I signed for Aston Villa. I was going over to Aston Villa from I was 12 years old but I very nearly signed for Rangers first.  Little did I know then that I would be going to Rangers later in my career. I had been going over to Villa most weekends at one point before they changed the rules that you had to live within a certain distance from the ground. After that, it was school holidays where the school bag was forgot about and the boot bag was packed. I had got to know the boys at Aston Villa quite well before making the move. It’s a big thing for any kid at that age to leave the home comforts and it's tough being away from family and friends but it’s what I was determined to do and make a success of.

GS: As a schoolboy international, you were part of the first Northern Ireland U15 team, under the guidance of manager John McKeag, to win the Victory Shield back in 2001 when you beat England 1-0 at Windsor Park and drew with Scotland before the clinching game against Wales was at Ballymena Showgrounds. Do you recall any memories from that game where another future international played, namely Dean Shiels, along with future Irish League players Johnny Black, Chris Kingsberry and Conall Murtagh, now the first team fitness coach at Liverpool.

SD: Again, great memories, as it was a great platform for us to go and test ourselves against the best players in the UK. It was an incredible feat to win it.

GS: In 2002 you played U16-17 international football with former Ballymena United captain Albert Watson and present captain Jim Ervin who was at Nottingham Forest. After progressing quickly through the underage set-up you got to sit on the bench in a qualifier in Azerbaijan in 2004. How did it feel being part of the senior set up at such a young age,19?

SD: I had made my debut for Aston Villa at 19 and was playing regularly at the time in midfield, so the call-up was just like the next step in my development.

GS: The NI senior squad you joined had just completed a long spell without scoring and you got the all important call-up for your full international debut against Canada a few months after your 20th birthday under new manager, Lawrie Sanchez, who had just come in and began to turn things round. What was the mood like in the squad you joined and was there a feeling things would take off under Lawrie?

SD: It was a really good bunch of boys and I was delighted to get the call up. That squad had some real quality in it and, really, we could’ve achieved more, but we lacked a level of consistency.

GS: Steven, roll on to the World Cup qualifier, and that assist against England in September 2006 where your delicate pass to David Healy set him up to quieten the Three Lions and for everyone to hear the Windsor Park roar. That must have left you with goose bumps...

SD: It will always be one of my all-time favourite footy memories. The atmosphere that night was unreal. To come up against the likes of Beckham and Gerrard etc and come away with the result was unbelievable. That result gave everyone a huge lift and the level of belief rose even higher.

GS: David O'Leary made you a Premier League regular in his Villa team at the age of 20. How did it feel being so young and playing in centre midfield against players like Lampard, Gerrard, Scholes and how did this experience help you when playing international football?

SD: I’ll be forever grateful to David O’Leary for giving me the opportunity and showing a huge amount of faith in me as a young player to play me so regularly for Aston Villa until his departure in July 2006.

GS: Unreal Steven that out of your four international managers two of them were reared in Ballymena, namely Nigel Worthington and Michael O’Neill. When Michael O'Neill took over, the international team was in a phase of transition, after a difficult qualifying campaign for the 2014 World Cup. What changed for the Euro 2016 qualifiers?

SD: We had a belief that although results didn’t go our way in that campaign there were signs that our performances had improved. Then we go and get a huge result to start our qualifying in Hungary and it was just a snowball effect from there on. Confidence and belief in sport can’t be underestimated.

GS: You had first captained the international team as a 21-year-old in 2006, but became regular captain a number of years later. How did it feel heading up the squad that qualified for Euros in 2016 and went on to reach the knock-out stages there?

SD: I had immense pride. As a group we all got on so well off the pitch and then when you have success you’ll always have that bond. It's always been a pleasure to represent Northern Ireland but to captain this team and walk out at the European finals was an honour.

GS: Now you are  only one game away from going to another European finals with your country - what is the mood like in the camp?

SD: We were obviously all buzzing after the game in Bosnia because we know how difficult it is to get results away from home in international football. They also have some top class players so it’s part one done and we’ll be giving it everything come November to achieve another dream - hopefully with the backing of the GAWA back in the stadium...