Howard Beverland is back at Coleraine 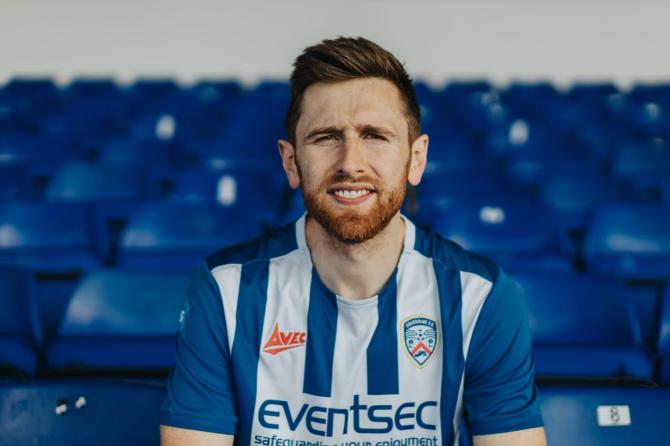 Howard Beverland pictured at the Coleraine Showgrounds on Saturday morning.

COLERAINE FC is pleased to confirm the signing of Howard Beverland.

The defender rejoins the club on a three-year-deal after leaving Crusaders, where he won the Irish League, Irish Cup and County Antrim Shield.

It marks a second spell at The Showgrounds for Howard who made his first-team debut under Marty Quinn at the age of 17 after making his way through from the Reserves.

After featuring under Davy Platt and Oran Kearney, the Ballymoney born defender would be given the captain’s armband and would go on to make 319 appearances.

Bannsider's boss Kearney highlighted Beverland's 'winning mentality' as a major influence in bringing the 30-year-old back to the Ballycastle Road.

"Howard had a great time here before but we weren't in the position to challenge for trophies back then, so it shows how far we have progressed that the likes of him and Stephen Lowry want to return to the club and add to their medal collection," he said.

"He has a huge amount of games behind him and has a winning mentality from a successful time at Crusaders.

"We have always had a good relationship and I'm looking forward to working with him once again.

"He is a local lad, he is well liked and fits into the profile of the club."

Beverland admitted he was delighted to be back at the club where he began his career, adding that he was hungry to challenge for more trophies.

"It's great to be back at the club and hopefully my experience can help help the club achieve further success," he said.

* More on this story in Tuesday's Chronicle.