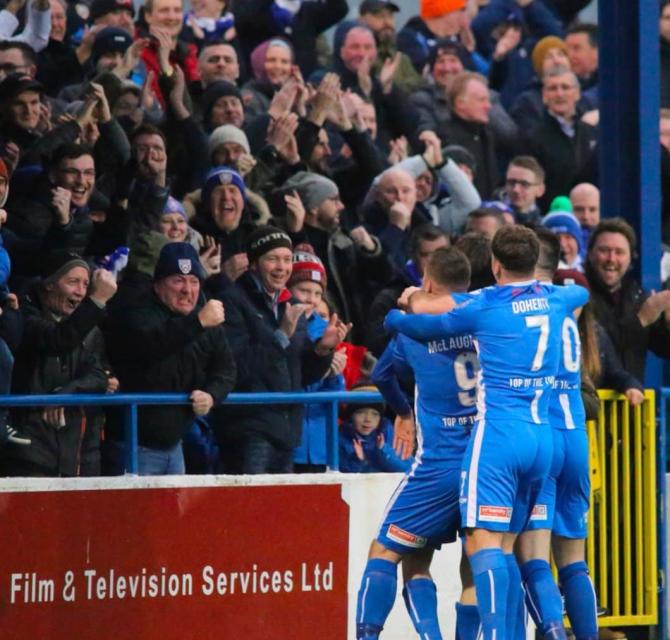 COLERAINE chairman Colin McKendry has warned that the domestic game is in danger of seeing clubs go under unless they receive urgent financial help.
McKendry’s concerns have been raised due to the possibility of Covid-19 having a devastating impact on the game in Northern Ireland.
The proposed start date for the new Danske Bank Premiership season is October 17 and if, as anticipated, attendances are heavily restricted, clubs will need financial assistance from the Irish FA and the Stormont Executive, says McKendry.
“I’m of the belief that the season will definitely start on October 17,” he said.
“I’ve been involved in several NIFL Board meetings and we all want to see a 38 game league, but if the date keeps getting put back, then it will be too congested.
“The people behind the scenes are doing a wonderful job coming up with a schedule to see a full season being played.
“However, it is important that a sub-committee which has been set up to collate a business case on behalf of NIFL speak with the Association, the Government and other bodies to obtain financial assistance.
“I really fear for other clubs throughout all leagues in Northern Ireland if they don’t get financial help.”
The Bannsiders’ fixtures in European competition have been behind closed doors, with limited spectators allowed into the ground for the pre-season games against H&W Welders and away to Limavady United.
However, McKendry is hopeful that the Council will allow up to a capacity of 50% once the season resumes.
“If you take all 12 senior teams of NIFL into account as one business and you factor in a loss of matchday revenue whilst paying staff, then it’s enormous money. That’s even before you consider shop and bar sales, playing kit and other utility bills.
“I’m hopeful that we would be able to start the season with a 50% attendance from the Council, although I noticed that Mid and East Antrim Council have started with 20% for the likes of Larne, Carrick Rangers and Ballymena United in their pre-season games.
“If we have to work with 20% then clubs will definitely need financial assistance to keep the lights on and then once that numbers improves, then it’ll be up to the clubs to look after themselves.
“This is all depending on no further spikes of COVID-19 but if we can keep washing our hands, maintaining social distancing and wearing our masks, then hopefully we can pull through this.”
The Danske Bank Premiership was called to a halt in March following the pandemic that saw Linfield being crowned champions and Coleraine named as runners-up.
Local action returned in late July as the Bannsiders were beaten in the semi-final of the Irish Cup as Glentoran lifted the trophy against Ballymena United.


* For more on this and Coleraine's preparations for the Europa League tie against Motherwell pick up a paper of The Chronicle, out now...