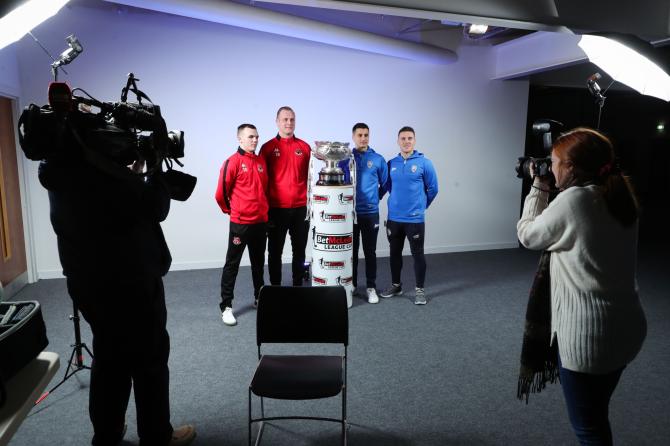 Players and management from Crusaders and Coleraine attended a press conference ahead of the Bet McLean League Cup final at the National Stadium at Windsor Park on Wednesday.

The admission comes as it was revealed that 3,500 tickets for the first major domestic final of the season have been sold - ten days before the Windsor Park showdown.

Coleraine and Crusaders meet at the National Stadium on Saturday February 15, a game which will be shown live on Sky.

The game is a repeat of the 2012 final in the same competition which Crusaders won 1-0 thanks to a goal from Chris Morrow.

Crues manager Stephen Baxter admits that victory acted as the catalyst for future success for the north Belfast club.

They lifted the Setanta Cup that same season before going on to win a hat-trick of league titles.

The Bannsiders, meanwhile, struggled for success in the ensuing years, until the memorable Irish Cup win over Cliftonville in 2018.

Coleraine and Crusaders have met three times in the league to date, with the Showgrounds side holding a 2-1 advantage.

But that will count for little next Saturday evening.

Cup finals are all about what happens on the day, which makes next Saturday such an exciting prospect.

For a full preview of the Bet McLean Cup final - and your chance to win tickets to the game - don't miss Tuesday's Chronicle.

McShane expresses condolences after death of man at Ballintoy Harbour