Much needed donations sent out to war torn country 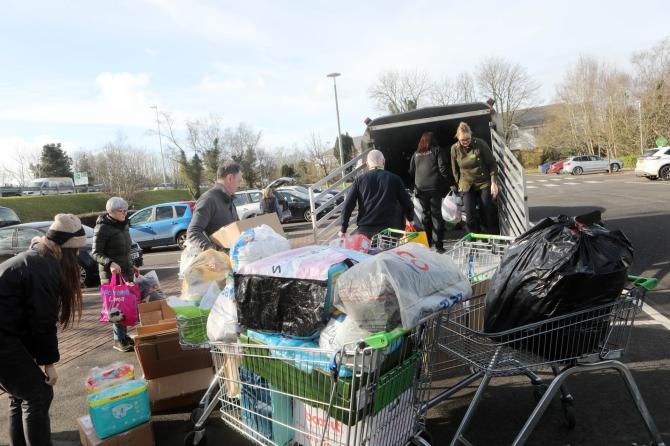 Loading an abundant of donations for the Ukraine Relief, donated by customers and staff at Asda, Coleraine on Saturday. WK10-18TM

AS the war in Ukraine rages on, kind-hearted members of the local community have shown an outpouring of generosity by collecting essential items for refugees as they make their way across the Polish border to a safe place in Warsaw.

Local schools, businesses, charities and many more across the North Coast have displayed a sense of unity by gathering items such as clothes, shoes, blankets and toiletries that have been loaded onto 40 foot lorries and are being delivered straight to Ukraine as well as shelters and homes throughout Warsaw.

A total of 25 lorries were sent to over 50 drop off locations throughout Northern Ireland, with Asda Car Park in Coleraine being one of them, along with collection points throughout Limavady and Dungiven.

These much-needed donations were in response to a GoFundMe Appeal, set up by Founder of Hope for Youth Ministries, Colin Tinsley who so far has raised an astonishing £132,650 for the refugees that have been suffering tremendous hardship as a result of this conflict.