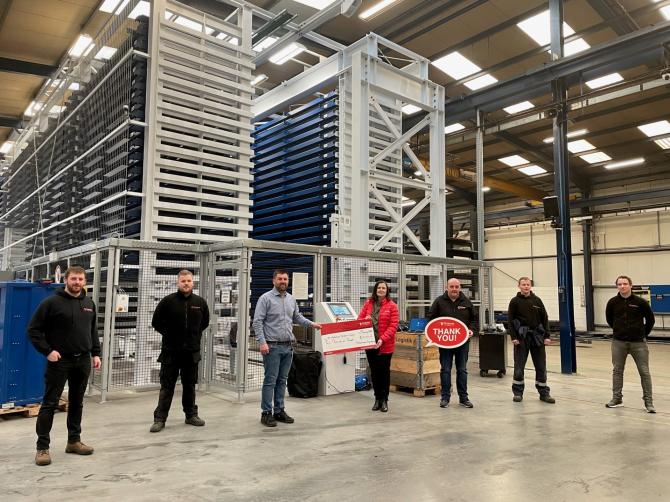 Pictured in the image attached is Mark Hutchinson, Breige Mulholland (Head of Operations at Air Ambulance NI) and representatives from the Hutchinson group.

HUTCHINSON Engineering have supported Air Ambulance NI (AANI) for a second year, donating £10,000 which will greatly support the work across Northern Ireland delivering pre-hospital care to those in need.

In February 2020 Mark Hutchinson and a group of employees were able to visit the Air Ambulance base and see first-hand the impact their donations would have on the charity.

Clearly inspired by the visit and the impact Air Ambulance NI has on those in need, Hutchinson Engineering decided to support the charity again in 2021.

Hutchinson Engineering also donated two standalone hand sanitising units which are in use at the base.

Mark Hutchinson, Managing Director, Hutchinson Engineering commented: “Hutchinson Engineering is delighted to announce the final total raised for Air Ambulance NI, our charity partner. The Air Ambulance is making an amazing difference across Northern Ireland, we know how vital it is not just for a rural manufacturing company like ourselves, but for our employees and their families.”

Breige Mulholland, AANI’s Head of Operations said: “We are very grateful to all at Hutchinson Engineering for their support.

“When the worst happens, the doctor, paramedic and pilot are at base and will reach the patient in a matter of minutes, bringing the hospital direct to them, which can be the difference between life and death.

“It was a pleasure to visit Hutchinson Engineering and gain an insight into the not only their manufacturing plant but also their investment into their people.

“After 50 years in business it was a fantastic achievement to be awarded Manufacturer of the Year at the Insider Media Made in NI awards 2021. On behalf of Air Ambulance Northern Ireland thank you for supporting your local charity and having a direct impact on those in need of the service.”