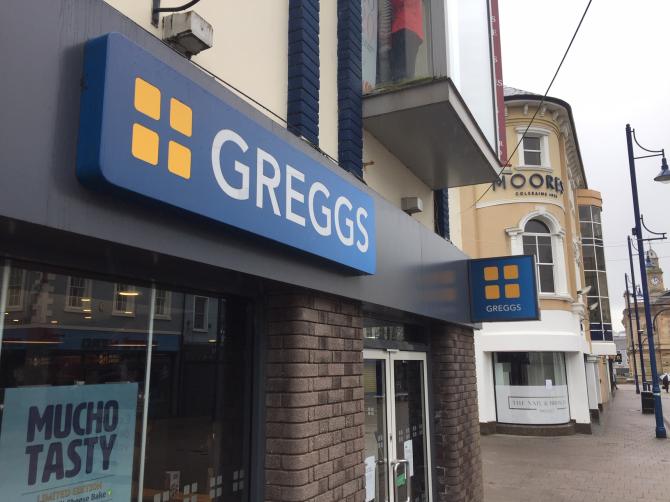 AROUND 100 rural householders isolated by the Covid-19 crisis feasted on free surplus pies and sausage rolls last week as bakery chain Greggs closed its doors.
The firm, which has branches all over the UK, got in touch with a volunteer group on Tuesday when the lock-down began.
Councillor Adrian McQuillan takes up the story: “We had been out in the community with Moneydig Rural Network delivering food parcels when out of the blue I got a phone call from Greggs.
“They said they we closing the store in Coleraine. They had seen what we were doing on Facebook and so they asked if we wanted the food they were no longer able to sell.

“I was dispatched in the van down to Coleraine and we filled it to the gills.
“There was sausage rolls, meat pies, chicken and steak bakes, muffins, bread, baps, milk orange juice – there was so much I could hardly get the doors closed.”
There was so much food he had to call on council colleague Philip Anderson to find other groups to share the supplies.
Cllr McQuillan and his team spent the rest of the day delivering food to grateful householders in some of the most isolated part of the borough.
“We took it around roughly 100 vulnerable people living around Moneydig and Garvagh,” he said.
“Some of them were nearly in tears with gratitude.
“I had to tell them we were only passing it on from Greggs.”
Mr McQuillan says he's been heartened by people's willingness to pitch in as the Coronavirus crisis tightens its grip.
“There has always been a pretty strong community spirit in the area, but it's at time like this you see just how strong it is. It's been inspiring to see how people have pulled together.”
And he was full of praise for staff and management at Greggs for thinking of the worst affected.
“I want to say thank you from the bottom of my heart. I don't even think we were the only ones they helped.
“But a good deed like that will stand them in good stead - I know I will certainly be paying a visit when this is all over.”

'Big G' forced to hang up the boots because of injury