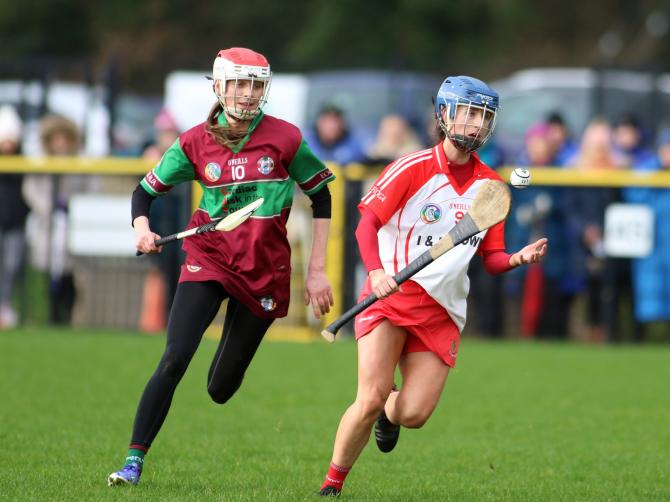 Referee: Alan Lagrue ET and result on the day applies

STORM EUNICE played havoc with Eoghan Rua’s preparations for their next assault on an All-Ireland title.
Their semi-final with the Roscommon champions Athleague was postponed at the eleventh hour.
The pitch at Inniskeen Grattan’s in Monaghan was deemed unplayable due to the effects of the storm, and thankfully the north coast side didn’t fall foul of the Camogie Association’s bizarre decision to drag Slaughtneil on a nearly five-hour journey to Wexford a mere twenty-hour hours after their own All-Ireland Senior semi-final fell foul off the elements.
The match has been rescheduled for this coming Saturday (February 26) so the Eoghan Rua girls will have to prepare yet again. They will be hoping.
There are no easy games when it comes to All Ireland level, and this Athleague side actually competed in the Connacht Intermediate Camogie Championship.
They were defeated in the final by Salthill-Knocknacarra of Galway but were nominated to represent Connacht in the junior championship. They have several representatives on the Roscommon camogie panel and so are well placed to provide a stiff challenge to the Derry and Ulster champions.
Step up
Competing against a team who have played at intermediate level will represent a significant step up in challenge for the Eoghan Rua side, and they will look to the experience of players from their most recent All-Ireland run in 2014 to provide the leadership.
Left from that side are: Grace McMullan, Maria Mooney, Méabh Duffy, captain Éilis McNamee, Megan Kerr, Rosanna McAleese, Katie Mullan, Gráinne Holmes, Clare Holly and Niamh Archibald.
Grace McMullan has moved from an all-action full forward to an assured presence between the sticks.
Maria Mooney, Méabh Duffy and captain Éilis McNamee will provide the cool headedness in the backline and Megan Kerr the drive at midfield.
Rosanna McAleese and Katie Mullan have become key members of the side since the senior semi-final defeat those eight years ago and will hope to combine as well as they did in the Ulster final win, with the clever runs of Clare Holly and the class of Gráinne Holmes.
Of course, the north coast side have changed greatly in the interim.
As Sorcha Duggan proved with her player-of-the-match performance in the Ulster final, she is more than capable of performing at this level.
Shauna Doherty has been an excellent addition to the full forward line, as she again showed with her score-taking in the Ulster final and during the championship as a whole.
It is a difficult one to call. Eoghan Rua will certainly have done their homework and be as well prepared as possible, Athleague likewise.
It could come down to a stroke of luck or the bounce of a ball.
If the weather remains as it is for the week, then there is no doubt that it will have a significant effect on events.
There is nothing the Eoghan Rua players and supporters would like more than another trip to Croke Park.
Nothing will be left to chance.
One week to go.

Report and reaction inside Coleraine's paper...