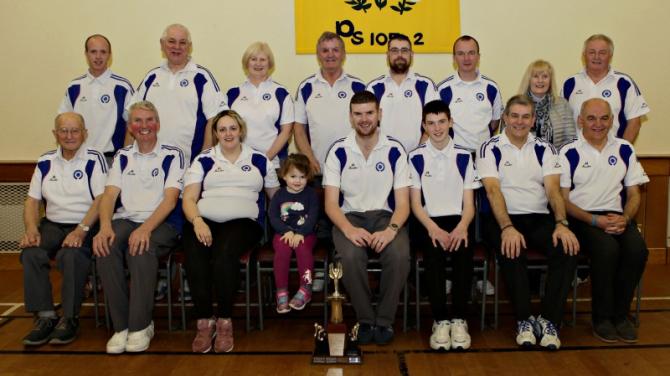 IN front of a huge crowd, St. Colman’s took on the holders, Dunluce, in the final of the Morrison Trophy.

This time, however,it was the team from Dervock who were successful. In a hard fought game, St. Colman’s deserved their win and I am sure on another night Dunluce would give them a better game.

On mat one Aaron Walker (St. Colman’s) played Barry Kane (Dunluce). The front end of the Dervock rink settled in much quicker than their opponents and by end five St. Colman’s were leading by seven shots. Dunluce then came alive and playing the last end they were ahead by a single shot. Walker however won the last end to end up all square.

It was a similar story on mat two with Uel McKeeman (Dunluce) up against David Walker (St. Colman’s). After four ends Walker was six shots ahead. Dunluce then won three ends in a row but could not catch up leaving the St. Colman’s rink to run out winners by four shots.

This left St. Colman’s four up at the break, a lead, but the game was still very much in the balance.

*Read the full report in this week's Chronicle.