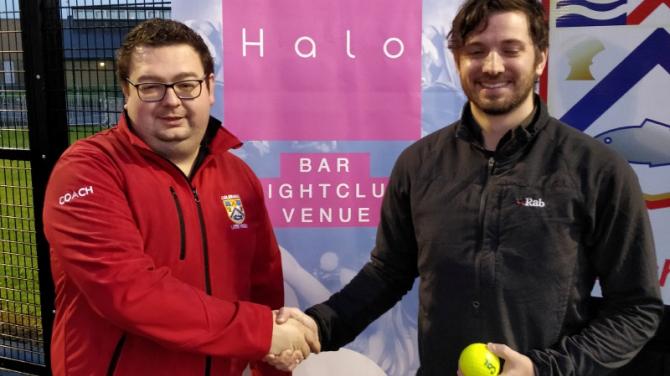 With the visitors finishing in the top half of the league last season, newly-promoted Coleraine knew they were in for a battle - and so it proved.

Ballymoney were quickly on to the attack and in the initial stages some sterling defending by Laura Kettyle, Ursula Harper and Faith Ball was called for as the visitors swept forward.

In midfield, the new partnership of Jessica Small and Morgan Jenkins worked hard against the rampaging blue attackers. Despite their early dominance, which saw Ballymoney successfully breach the defence on a number of occasions, Michelle Budina was on hand to keep them out.

Coleraine had their chances and some strong tackling from Catherine Kemps and Emma Jamison helped to get the counter attacks going, aided by some strong running down the right from Zoe Campbell.

With fifteen minutes gone a fast sweeping move from midfield saw Helen McCallum outrun the Ballymoney defenders and as the ‘keeper came out a delightful pass inside gave CarolAnne Agnew the simplest of chances to open the scoring; an excellent team goal, albeit against the run of play.

With their tails up from taking the lead, Coleraine dominated possession over the next ten minutes; a couple of penalties were well defended by the visitors and the shots fired in on goal.

One attack down the left saw CarolAnne get to the base line and drive the ball across goal , where Zoe Campbell was on hand to knock it home.

Tori Culbertson and Alex Black came off the bench to freshen things up and the match seesawed from end to end with no further goals before half-time.

The interval discussion was of the battle still to come, the Coleraine girls appreciating that the match was far from over.

Ballymoney came racing out of the blocks in the second half with wave after wave of blue shirts swamping the Coleraine defensive 23.

However, continued good defensive work from Laura, Faith and Ursula initially kept them at bay. Five minutes in and a couple of penalties in quick succession saw the breakthrough finally come leaving it 2-1 to Coleraine with a half hour remaining.

It was not to be all one-way traffic, though, as Coleraine started to get back into their groove.

Tori Culbertson used her pace around the midfield to give Jess Small more freedom for her defensive duties and the return of Catherine Kemps helped to thwart Ballymoney’s right wing threats, with Anna Jinks coming on in behind.

The counter-attacking continued to cause Ballymoney problems and another quick pass forward from Emma Jamison saw Helen and Alex break through and, finding space where none existed, CarolAnne tore the defence apart and crashed it home to restore the two-goal advantage with twenty minutes left.

Both sides continued in similar vein, with attack after attack being kept out by excellent defending and goalkeeping.

Alyson Nicholl made her return to a Coleraine team as she came on on the right, with defensive duties foremost but also as an attacking threat.

The sustained pressure from Ballymoney won them a few more penalties and eventually they got another one home to make it 3-2, with still plenty of time in the match.

Into the final ten minutes and it was Coleraine who showed the greater threat as Ballymoney were pushed deeper; Alyson attacking down the right, with Emma in support.

They worked the ball into the circle and CarolAnne was again on hand to beat the defenders, turning them inside and out before crashing it home to complete her hat-trick.

The final few minutes were played out in similar style, with Coleraine having much of the play and as the whistle blew it was a final score of 4-2 to the home side.

A really tough match for both teams and a testament to the girls’ fitness and determination to keep pressing throughout the whole seventy minutes.