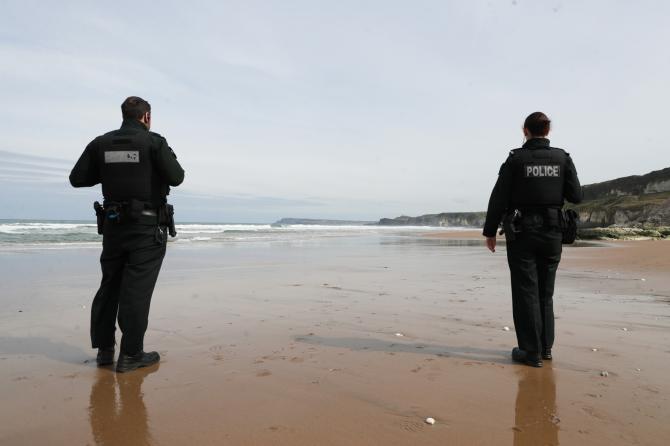 PSNI officers on patrol on the north coast on Thursday.

INCREASED police patrols and a 'different approach' will greet visitors to the north coast this Easter it has emerged.

The moves are to be introduced by the PSNI as it steps up efforts to tackle the spread of coronavirus.

Eighty-five written warnings have been issued in the first ten days of recently introduced regulations, but a new, tougher approach seems imminent.

Officers will be given the authority to stop vehicles and issue spot fines of £60, should they believe lockdown rules are being broken.

Assistant Chief Constable Alan Todd said there were clear guidelines as to what was permitted.

“The restriction regime is that you have to have a reasonable excuse to have a need to leave home," he said.

“It is not just a reason but a need and I see no need for anybody to drive to take their daily exercise, so that would be a breach.

“We will encourage you to go home. If not, you may face a fine," he added.

The news comes against a backdrop of growing concern in the Causeway Coast and Glens council area about a possible influx of people to the area over the Bank Holiday weekend.

Already, there is anecdotal evidence to suggest that visitors are making their way to various resorts, against the stated advice of the authorities.

East Londonderry MP Gregory Campbell, whose constituency takes in Portrush and Portstewart, asked people to take heed of the advice to 'stay away.'

“As MP for the Coleraine, Portrush and Portstewart area I want to see as many visitors as possible to the region," said the DUP member.

"We depend on visitors. Easter weekend is normally one of the busiest of the year but this weekend has to be different. We want people to stay at home.

"We support the police in enforcing the extraordinary laws we have at the moment. They exist to save lives. Second homes and caravans are not reasons to travel to the north coast.”

“No matter where I go in the world, I promote the tourism gems of Northern Ireland such as the north coast, but this is an extraordinary time and to protect our hospitals and our loved ones we need people to stay at home," she said.

"Second homes and caravans are not a reason for travel. The police will be taking a very tough line on this and we support them fully.”

Latest figures have revealed that four more people have died with coronavirus here, bringing the total to 82.