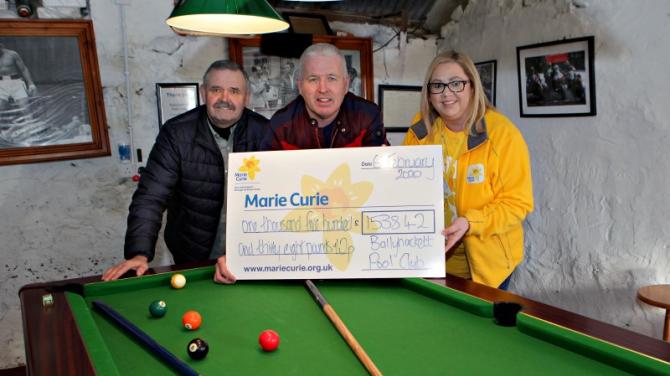 Heather Miller, of Marie Curie, receives a cheque for £1538.42 from Ronnie Steele and Simon McNabb with the monies raised at the 3rd Annual Ballyhackett Pool Competition held at Christmas. WK7KC01

A KIND-hearted Ballyhackett man says that he was overwhelmed by the immense generosity and support from the local community which helped raise over £1500 for a cause close to his heart.

Cancer is a disease which many members of the public can identify with. In fact, In the last 23 years, over 87,000 people in Northern Ireland have suffered a cancer diagnosis. This year it has been predicted that almost one in two people will have to live with cancer at some point in their lives.

Simon McNabb, from Ballyhackett, raised £1538.45 by holding a pool tournament at his house on Sunday, December 8 last year to raise funds for Marie Curie and he hopes that donations like this can help make the difference.