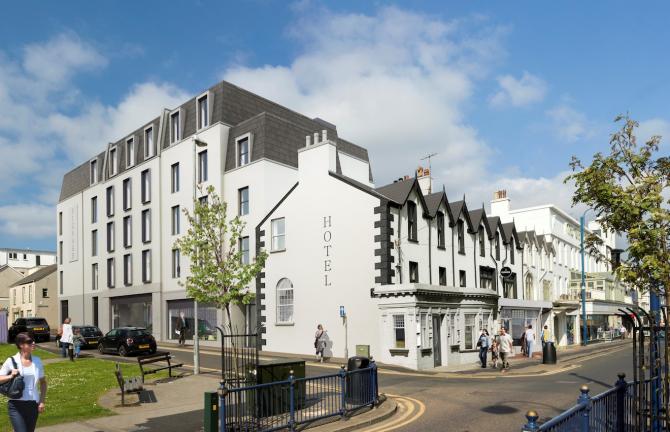 The Londonderry Hotel in Portrush.

The firm behind a £6m redevelopment of Portrush's Londonderry Hotel says it is reconsidering its priorities due to ongoing planning delays.

As reported by The Chronicle in September, the council's decision to approve the scheme was called in by Northern Ireland's Chief Planner for reassessment by departmental officials.

In January the council's planning committee had voted unanimously to reject local planner's advice and grant Hotelier Rajesh Rana permission to demolish most of the listed Victorian building and replace it with a 3-5 storey, 87 bedroom hotel, complete with bar and restaurant.

The proposal was opposed by historic environment officials and rejected by planners based on “partial loss of a listed building and its historic fabric” and its “impact on, not only the listed building but also on the setting of the surrounding listed buildings.”

Elected members however ignored planners' recommendation choosing instead to prioritise the economic boost the new hotel would provide.

They also insisted the most important historic feature of the existing building – the art deco facade – would be retained.

This week Mr. Rana said the delay was putting the whole scheme in jeopardy

“This is an important development for us and for the North Coast area and the delay in approving the project is unacceptable," he said.

“Following the listing of the building we completely redesigned the proposal to retain the important listed front terrace and provide modern accommodation to the rear. I genuinely believe this is now the best of both worlds.

“The Council has been very supportive at all levels, as they recognise the need to bring regeneration, investment, and much-needed tourist accommodation into the heart of the town. This project will create 48 jobs during its construction phase and 41 permanent jobs when it opens. The economic benefits of this £6.6million investment will be a game-changer for the local economy, with £1.4million generated each year in economic output.

“Unfortunately, the Historic Environment Division objected to the application, which led it being ‘called-in’ by the Department for Infrastructure (DfI). The DfI took eight months to decide whether or not to call it in, and now it is stuck in an open-ended process with no timelines, no ability to make representations nor any democratic accountability.

“We cannot wait endlessly for this application to be approved as we have other commitments we need to fulfill.  Unelected and unaccountable public servants cannot be allowed to hold-up investment in this way.

“As a result of the delay we need to re-examine our priorities and we will now be progressing plans for projects elsewhere in NI.

Mr. Rana concluded: “It is positive news that the Assembly is back to work and we request that the Minister for the Department for Infrastructure, Nichola Mallon MLA, prioritises this issue for all planning applications that have been called in or unreasonably delayed as a matter of urgency.”

Andras Hotels was founded in Belfast in 1981. It currently operates six internationally-branded hotels in Belfast.

*Read all the latest planning news inside this week's Chronicle.