Jeff Wright on Bamford, the Wrightbus deal and the 'legacy land' 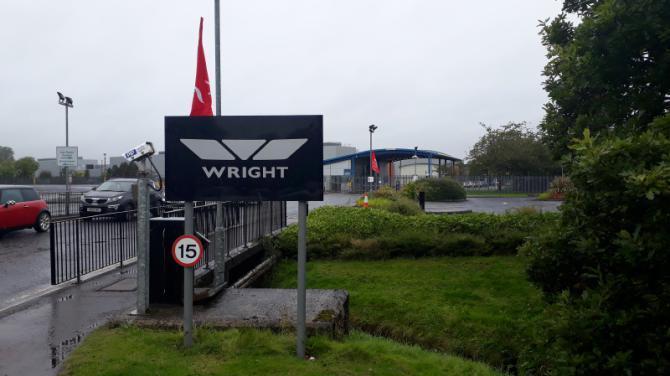 The Wrightbus premises in Ballymena.

Dessie Blackadder
Friday 11 October 2019 11:32
AFTER a day of hard wrangling and a night of intensive negotiations, Jeff Wright and Jo Bamford completed a deal for Wrightbus which everyone in the local area has been hoping for.

And as a 'kicker' to the deal, Mr. Wright announced that he had gifted 40 acres of family owned farmland to Mid and East Antrim Council by way of a legacy for the people of Ballymena in recognition of their contribution over 70 years to the service of Wrightbus.

A statement issued on behalf of Mr. Wright, who has been at the eye of an emotional storm in recent weeks, said: “Following intensive overnight negotiations between the two parties agreement has been reached in principle over the sale of Wrightbus to Ryse Hydrogen.

“The two men at the centre of the deal, Jeff Wright and Jo Bamford, say the outcome of the negotiations involved pragmatism in arriving at an arrangement which is ultimately in the best interests of the long-term sustainability of the bus manufacturing business and jobs in the Ballymena area. The two businessmen confirmed that the Wrightbus factory has been saved from liquidation with Jo Bamford as the new owner of the business.

“Mr Bamford’s firm will acquire the entire premises at Galgorm including the factory, fixtures and fittings as well as the associated land.

“Commenting on the purchase agreement and wishing Mr Bamford every success Mr Wright confirmed that he had gifted 40 acres of family owned farmland to Mid and East Antrim Council by way of a legacy for the people of Ballymena in recognition of their contribution over 70 years to the service of Wrightbus.”

In a personal statement, Mr Wright said: “This legacy gift is a tribute not only to my father, his father before him, and the Wright family members but most importantly it is a tribute to the generations of workers who helped build a proud manufacturing tradition in Ballymena. It is my true wish to see this legacy used for the purposes of expanding manufacturing and benefiting our local community.

“The Chief Executive of Mid and East Antrim Borough Council indicated, during discussions in September, that the Wrightbus legacy lands will be used for a landmark project. In the last few days it was confirmed that the Council’s £26m i4C innovation Centre could be located on the site.

“This will provide manufacturing start-up space and alongside the legacy lands from JTI and Michelin help Council advance their bid to collocate a Queens University led Advanced Manufacturing Innovation Centre. I believe the presence of this centre on the Wrightbus legacy land will send a clear message to Northern Ireland and beyond that Ballymena has a strong future in advanced manufacturing.”

The statement added that Mid and East Antrim Borough Council “estimates that the legacy of the site and the new investment would result in 2,460 jobs with the potential to rebuild Ballymena”.

It stated: “It is also has ambitious plans to secure one of the ‘Heathrow Hubs’ for the town which would see a further 5,000 engineering and manufacturing jobs for the area. The new innovative Hubs are to be used to pre-assemble components of the expanded airport before transporting them to Heathrow.”