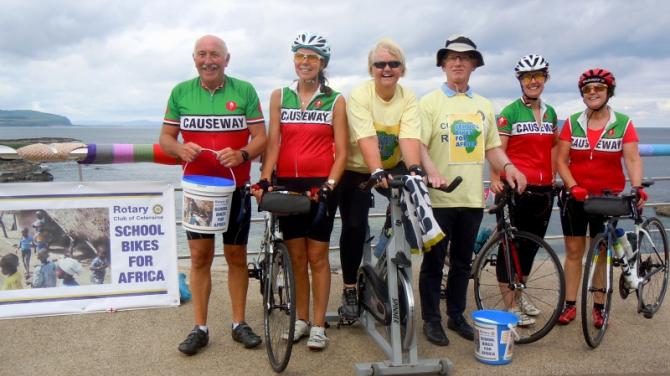 THE Rotary Club of Coleraine has revealed to The Chronicle that their static cycling event, which supported the ‘Schoolbikes for Africa’ campaign, raised a whopping £1,100 so far.

The event was very well received and ran alongside the Red Sails Festival, which enjoyed record-breaking figures this year.

The static cycle took place on The Promenade in Portstewart on Wednesday, July 24 and was supported by 10 members of the public and Causeway Cycling Club. The volunteers cycled for ten hours in total, with each person doing an hour stint on the spinning bike.

The project has raised vital funds for the campaign which will, in turn, help poverty-stricken children from The Gambia and other areas get to school.

Over 200 miles were clocked up on the day and so far members of The Rotary Club of Coleraine have received up to 40 bicycles so far. Their aim is to gather 100 and their recent fundraiser should help them complete their goal.